Pawnee by Leslie Knope: A Must-Read for Parks and Rec Fans 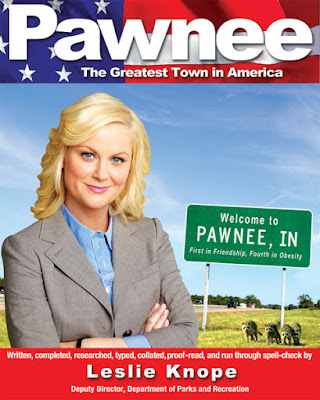 A few weeks ago there was a Parks and Recreation episode that centered around a book written by Amy Poehler's character Leslie Knope. Pawnee: The Greatest Town in America is a history of the fictional locale where the show takes place. But good news P&R fans. The book is real.

The publication is "written, researched, typed, collated, proofread and run through spell check" by the one and only Deputy Director of the Department of Recreation and soon to be (maybe) city council member, Leslie Knope. She also got a little help from Nate DiMeo and the creative team from the NBC show.

Readers can revel in chapters like "The Swanson Pyramid of Greatness," "Raccoon Safety Information," "Nick Newport's Letter to His Children" and "A Brief Note on the Typeface."

In the introduction Leslie proudly proclaims, "We're not Indianapolis. And maybe we're not even Bloomington. But what Pawnee lacks in fame or beauty, we make up for in heart. Like the pudgy, sarcastic best friend in a romantic comedy, we are actually really interesting and cool if you look hard enough."

The book features some of the city's slogans through the years like "Pawnee: The Akron of Southwest Indiana" or "Pawnee: It's Safe To Be Here Now." Our personal favorite is "Pawnee: A Place and a Town." There's a visual tour of JJs diner including Ron Swanson's favorite menu item "The Four Horse-Meals of the Egg-Pork-alypse" which includes lots of meat, naturally. And special guest author, shoeshiner and Mouse Rat lead singer, Andy Dwyer, takes readers on a tour of the best concert venues in Pawnee.

The book has received glowing reviews from the characters on the show, none more positive than the one from Chris Traeger (played by Rob Lowe), "Literally the greatest endeavor of human creativity in the history of mankind." Sounds like a must-read for Parks and Recreation fans.