FEARnet’s Handing Out a Lot of Treats for Halloween 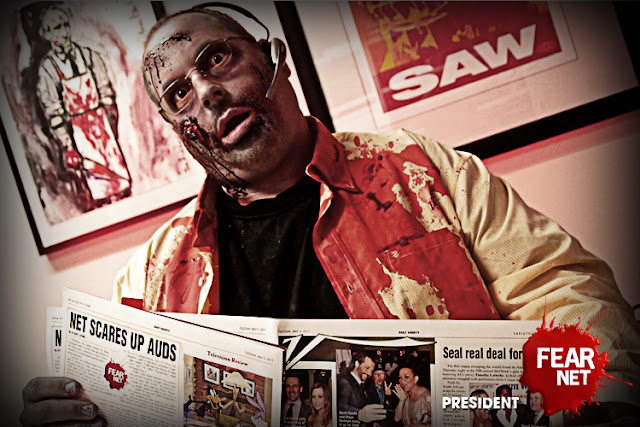 Getting excited about Halloween and wondering how you’re going to occupy your time between now and trick or treat time? Let us suggest that you tune in to FEARnet and leave it on for the next five days straight. Not only will the world’s leading horror, suspense and thriller channel be showing a freaky festival of films for the week leading up to the 31st, they also have two really special events planned. In an exclusive interview FEARnet President Peter Block gave us a sneak peak of the two main events and his take on the genre’s perceived resurgence.

You might want to get warmed up by watching Leprechaun 5: In the Hood tonight before catching Village of the Giants on Friday and Route 666 on Saturday. But no matter what you choose to view, don’t miss the U.S. premiere of Psychoville on Sunday, October 30.

And on Monday you’ll have plenty of opportunities to catch a screening of the horror film Trick ‘r Treat, because FEARnet will be showing a marathon of the Anna Paquin movie all day and night. Peter explained the reasoning behind the programming choice. “Trick ‘r Treat not only embodies the spirit of the season, but of FEARnet as well. We're so lucky to have it as the signature film for the network. It’s so well made and deserves to be the gem of a cult film that it has become.”

Peter’s proud of the channel’s holiday slate and the fact that no one knows the genre better than his team. He acknowledged, “Whether you call it New Year’s or Easter or Arbor Day, it’s Halloween year-round at FEARnet. But we're happy when other networks have success with their horror and thriller shows, and when they come play in our sandbox one month a year. Of course, if they continue to do it as much as they have been, maybe October at FEARnet will have to become something really scary: romantic comedies all month long.”

That’s one way to avoid the recent onslaught of projects that seem to be jumping on the horror bandwagon these days. But, as Peter pointed out, fright films have never really been off anyone’s radar. He remarked, “I don't think there's been resurgence in the horror genre; I just think that sometimes a title or two makes it feel that way.”

He continued, “When The Silence of the Lambs won the Oscar (deservedly so!), people talked about horror being in the mainstream theatrically, discounting Hitchcock, and Jaws and Alien and a slew of films from John Carpenter and Wes Craven. Not to mention, Stephen King and Dean Koontz books.”

Peter went on to add that some offerings in the genre were just disguised with different descriptors. “While horror titles were the constant companion of video renters, and late night HBO watchers, theatrical horror titles were referred to as suspense, thriller and psychological to make them more palatable to mainstream sensibilities, but Freddy, Jason and Chucky were mainstays and TV boasted The X-Files and Tales From The Crypt. When the nouveau horror titles like the Saw series, Resident Evil and Paranormal Activity reclaimed the moniker, it seemed to be an outlying directive.”

And Peter can’t help but acknowledge the increasing presence of scary fare in primetime. “Now that television networks need to find distinct programming, the ever-present horror field has been mined to deliver True Blood, Walking Dead, Dexter and American Horror Story. This is great for the genre as it de-mystifies a word that still frightens advertisers as much as it attracts audiences."

In the meantime, FEARnet is obviously in good hands with Peter at the helm. Not only is he an experienced horror genre producer with the Saw film franchise to his credit, he’s a fan as well. He recalled, “I started reading Stephen King's Salem's Lot in 7th grade (I just loved the embossed raised face on the book cover, and the thought of Danny Glick at my window kept me up for nights), was the kid that built the Aurora monster models that glowed in the dark, and I've always loved those film moments when the tension leads to a jump which usually then cracks me up.”

In fact, Peter is such a big fan of the genre he turned to it when the time came to pick a very important moniker. Jaws fans will appreciate what Peter revealed to us. “I named my production company A Bigger Boat. I think the Newington Cinema is still missing an armrest from when Brodie got his first up-close look at the shark.”

For more details on the FEARnet Halloween countdown and for air dates in your area, visit their website.