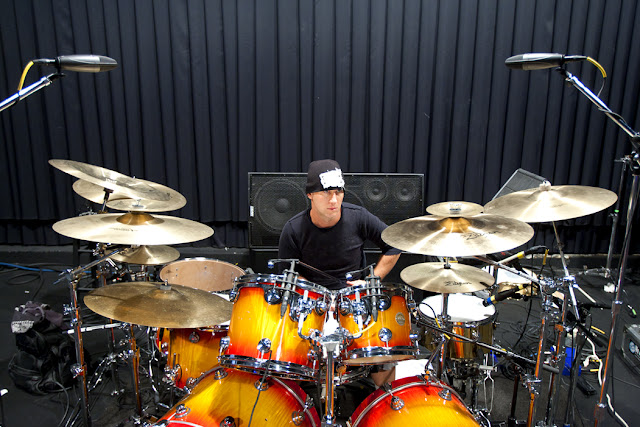 
In a recent exclusive interview, Stephen described the process of making the artwork for the project. “[SceneFour] showed up, they turned all the lights off in the room and gave me drumsticks with red, yellow and blue tips that were lit. These drumsticks are based on how sound is put together. And I found myself in a dark room, with four or five strangers and they had several cameras up.”

He went on to explain the essence of that moment of creation in the studio, saying, “It was really about living in the moment and seeing if they can capture this dance that a drummer does. And what was brilliant, which I didn’t expect, was in the dark and with the lit up sticks you saw this repetitive curve or zigzag motion of my body and my stick movement playing these different rhythms… like a tiny little rhythm like a cricket rubbing its legs or a big rhythm like a cannon shooting into the ocean. There’s so much you can do with a drum set and I could really see it in what they captured.”


He reflected on his personal style of music  and how that came across on canvas in his collection, which is called “Time.” Stephen remarked, “My sound is my personality. I’m talkative. I’m hyper. And that is how I play drums. And I love musicians where you can get their personality out of their performance. And that’s the kind of musician I want to be, where people get to know me just by hearing my playing. And I wanted to see if we could capture that visually — this crazy, talkative, bubbly thing that is me on the drum set. It’s me in conversation as far as lit up drumsticks in a dark room.” The Art of Drums series has so far highlighted works by Perkins and G’N’R/Velvet Revolver drummer Matt Sorum. There are forthcoming series planned with Rick Allen of Def Leppard, Frankie "Kash" Waddy of Parliament-Funkadelic and more. While Stephen hasn’t tried to guess which drummer is which by looking at their images, he did acknowledge that each performer’s unique technique shines through.


He observed, “When you look at other drummers and the art that came out of it and you compare it to mine, which I say is a lot of zigzag motion and a lot of large, round curvature motion, which is me lifting my hands and doing this tribal, repetitive beat. I think there is a difference and it looks different. And of course everyone’s got a different spirit and a different personality and if you can really put that into your instrument then it will come out in a dark room. It will come out with people’s eyes closed.”


Stephen continued, “I can see the differences and I can appreciate where everybody was when they did it. Maybe they were going through what I did, which I was trying to become this symphonic drummer and give them an hour concerto of dynamic drumming and see what it looked like.”


One thing that wasn’t captured during the process was the typical rock ‘n’ roll photo that’s become almost cliché. Stephen remarked, “They didn’t get my face either, because that’s the one drum face you get in all your great photos. It’s a beautiful picture and your face is all distorted because you’re a drummer. That’s fine because that’s energy. That’s healthy. But then again I was in pitch dark so I was like, ‘This is not about me or my looks or my hair on anything. This is about what energy is coming off the kit.’”


Perkins’ collection “Time” includes ten distinct images, which will be sold in limited editions of ten pieces each. The 100 canvases will be signed and accompanied by a certificate of authenticity. For more information visit the Art of StephenPerkins website.

Posted by Pop Culture Passionistas at 9:26 AM