Our Choices for Regis Philbin's Replacement 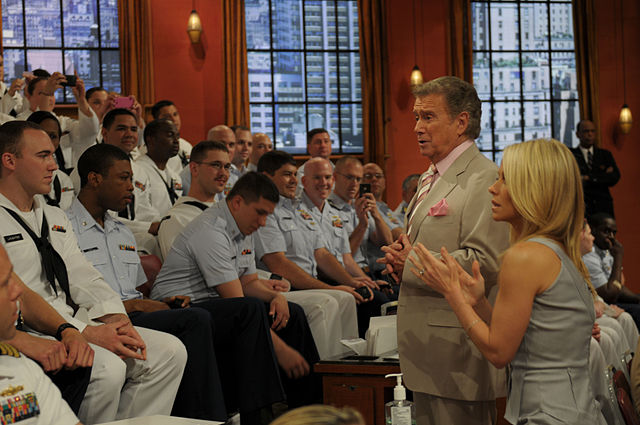 Today is Regis Philbin's final day on LIVE! with Regis & Kelly. After 25 years the host is retiring from the show but is rumored to be reviewing other offers. So don't expect the 40-plus year TV veteran to disappear altogether. In the meantime the search for his replacement is on. For now the show will just be called Live! with Kelly but Producer Michael Gelman and crew hope to fill the second chair permanently in the coming months.

Many names have been bandied about including American Idol's Ryan Seacrest (isn't he a bit busy?) and Kelly's husband Mark Consuelos who has subbed for Reeg in the past. Other pundits have mentioned Howie Mandel, Neil Patrick Harris, Jamie Oliver, Donnie Osmond and Jeff Probst. While all are high on the likability scale, they might be long shots for this particular gig. Here are the five men we think should comprise the short list for Reeg's replacement.

5. Chris Harrison
It might be a little bit of logistical nightmare for Chris during filming of The Bachelor/Bachelorette, but we're sure it's nothing that can't be fixed with all those private planes that seem to be at the show's disposal. Maybe Jake Pavelka could become his private jet-chauffeur. But seriously, if you've ever watched Chris conduct the interviews on the Women/Men Tell All and After the Final Rose episodes of the series, you know he's great at asking the tough questions, defending the underdog and lending a soft shoulder to cry on when things get emotional.

4. Dana Carvey
His name may have come up in jest, but we ask, "Why not?" With a comedian who can do a Philbin impression like nobody's business, it would be like Reeg never left. Besides he's got all that experience as the side-kick interviewer on Wayne's World to bring to the table. Party on, Kelly.

3. Tom Bergeron
Tom is another potential co-anchor with a tight schedule due to his Dancing with the Stars hosting duties. But if so many of the contestants can fly coast to coast between weekly episodes for rehearsals, surely Tom could make it work. Plus we still remember Tom from one of his earliest TV gigs, a local Boston daytime show called People Are Talking, and what better skill can the new host have than the ability to talk to people. That's the job, right?

2. Jerry Seinfeld
Jerry will be filling Reeg's shoes next week as the first temporary guest-host, while the permanent spot-filler is decided on. But we think Jerry's name should be put on that short list. After all if a guy can make a hit series out of a show about nothing certainly he can boost the ratings of a show about lots of things. Besides, isn't it time Jerry gets back on TV?

1. Andy Cohen
If Andy can handle all those Housewives and other out of rowdy, cocktail-infused guests on Watch What Happens Live, surely he'd make a great co-host for his close personal pal Kelly on a slightly lower-key talk show. The Bravo VP would bring that dash of hipness to Live! that Reg was lacking and his knowledge of the pop culture would would put 'em all to shame. And if Gelman and Kelly pick Andy, we'll give them our "Mazel of the Week."