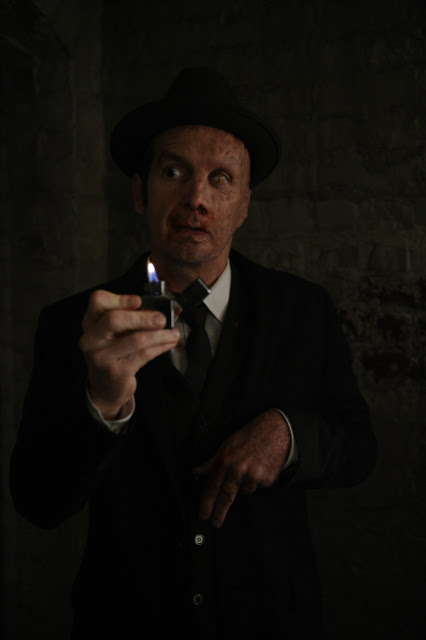 If you watch American Horror Story, you might not recognize Denis O’Hare. That’s partially due to the extensive make-up he dons to play Larry the Burn Guy. But it’s also because the brilliant actor is entertainment’s greatest chameleon.


From his twisted turn as Russell Edgington on True Blood to roles in rom-com’s like The Proposal, Denis always becomes the character he portrays. In a recent conference call interview he talked about Larry Harvey and how he steps into his shoes – literally and figuratively.


Denis described the physical transformation he undergoes to become Larry. “Makeup takes about three and a half hours. And it’s this great company that works with American Horror Story… And it’s a long process, obviously.  It’s multi-layered appliances, and then there’s a lot of hand painting. And then there’s a wig involved and then that goes on.  And then the hand has to be cinched in and the hand gets makeup-ed.  And it’s exhausting. But it’s really great, because it allows me to step down into the character gradually.  I don’t ever get chopped into shooting.  By the time I am shooting I am very well ready.”


As a result of all of the physical preparation, Denis find that it’s quite an emotional metamorphosis. He confessed, “When you first put it on I was walking around the lot at Paramount in California, and I went to the cafeteria.  And it was very uncomfortable, because the makeup is so good, and it looks so real that people assumed I wasn’t an actor.  They assumed that is was, ‘Oh, look at that poor guy.’  So people would avert their eyes, or they would nod politely. And it’s a great exercise in exploring what the character’s daily reality must be like.”


Because of this, Denis admitted that he’s become a bit of a recluse on set. “I found myself, and I find myself, not wanting to be in public. So when I’m shooting I tend to sit in my trailer alone… I don’t want to walk around. I don’t want to be gawked at.  It’s really weird. I just find myself in the position… Not that I’m ashamed — I don’t want to be the freak show. That’s a really interesting experience I didn’t expect to have.  It’s an intense thing. ”


That’s fitting for the character that Denis plays. Larry the Burn guy is complex to say the least. And, frankly, he isn’t the most likeable person on TV. But O’Hare explained that he feels a very strong connection to Harvey. “I love this character and I love him because I feel like he is engaged in a sort of timeless epic struggle.  And I see him as a Dante-esque figure.  He’s somebody who is trapped in a circle of hell and he’s trying to work his way out.  And he’s a human being who’s flawed and he’s obviously weak, and he’s given into temptation and made bad choices.”


He compared Larry to a few other iconic characters, “I have an innate sense of who he is, and when I’m playing him it’s all very instinctual.  But to describe it I find myself running to literature, and so it’s like Igor in the Frankenstein mythology or an amanuensis in some other mythologies or a psychopomp as they call them sometimes — somebody who traffics between worlds.  And it’s a really odd, beautiful character.”


Unusual roles aren’t foreign to Denis. He constantly is able to get lost in a wide variety of parts — some darker than others. He reflected on why he is able to disappear into each performance. “Part of it is the richness of the character.  A part of the reason I’m drawn to characters like this guy or like Russell Edgington or like even the guys like John Briggs in Milk, is that they’re sharply etched, and they’re clearly defined.  And so I, as an actor, have an easier task.”


He continued, “I know where I’m going. And if you add to it an aspect that’s larger than life like someone like Russell Edgington, who’s 2800 years old or someone like Larry who’s got a very severe physical deformity, it takes away part of your resistance as an actor. And you simply give over to the character’s features and the character’s characteristics. Ryan [Murphy] wanted me to have a wooded arm and a limp.  So the minute you start putting these things on you feel different and you feel like someone else and that then forms everything.”