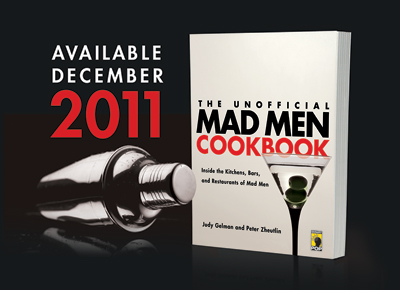 There's one drawback to being a TV addict. Spending a lot of time in front of the tube doesn't leave a lot of time for reading. That's why we love the holidays so much. This time of year many fall shows have wrapped up, most current shows are in reruns and mid-season replacements don't start until January. And so we can can curl up on the couch with a blanket and some cocoa and read... about TV, of course. Here's our holiday reading list of all the TV-related books we want to catch up on.

1. Happy Accidents by Jane Lynch
The Emmy-winning star of Glee has written her memoirs about the happy accidents that occurred on her road to success. It also covers the personal issues she dealt with along that way that at one time turned her into a real life Sue Slyvester. We've loved Jane since her days in the Christopher Guest movies like A Mighty Wind and Best in Show, and look forward to reading about her journey.

2. The Importance of Being Ernie: From My Three Sons to Mad Men, a Hollywood Survivor Tells All by Barry Livingston
We want to peruse this one just for the title alone. Who doesn't love a good literary pun? And when it's written by Barry Livingston, more commonly remembered as the bespectacled youngest brother from My Three Sons, how can you go wrong? Barry recounts his memories of his rivalry with Ron "Opie" Howard, working with Fred MacMurray and meeting Elvis.

3. Arrested Development and Philosophy: They've Made a Huge Mistake (The Blackwell Philosophy and Pop Culture Series) by J. Jeremy Wisnewski and Kristopher G. Phillips
Fans of the prematurely canceled TV series got good news recently that Arrested Development is coming back. Apparently Netflix has signed a deal to revive the show in 2013. The on-again, off-again movie plans are still uncertain. But while we wait for the Bluth's to re-conquer the small screen, we're going to take a philosophical journey into what makes them tick when this book is released on December 20.

4. The Unofficial Mad Men Cookbook: Inside the Kitchens, Bars and Restaurants of Mad Men by Judy Gelman and Peter Zheutlin
Speaking of shows we're eagerly waiting to see again, it feels like it's been decades since Mad Men graced our living rooms. To ease the withdrawals, we might just not cook up some tasty treats (liquid and solid) from the Unofficial Mad Men Cookbook. It includes recipes for  Oysters Rockefeller and the prefect crown roast and other culinary delights from the 1960s New York restaurant scene.


5. From Yesterday to TODAY: Six Decades of America's Favorite Morning Show by Stephen Battaglio
Too much reading makes us yearn for some visual stimulation, so this coffeetable book chronicling the history of the Today show is the perfect solution. It has lots of pictures for us to feast our eyes on as we learn about the ins and outs of our favorite morning show.

6. The Cupcake Diaries: Recipes and Memories from the Sisters of Georgetown Cupcake by Katherine Kallinis and Sophie Kallinis LaMontagne
It seems like every time we turn around there's anther baking competition or cupcake docu-drama on TV. And we admit we watch most of them. But there's one that is particularly near and dear to us, DC Cupcakes. The two sisters take Washington by storm with their dramatic, and typically gigantic, cupcake sculptures. Now Sophie and Katherine, the girls from Georgetown Cupcake, have written a combo memoir/cookbook that details their rise from their Greek grandma's kitchen to bakery moguls and includes 30 family recipes.

7. Talk Show: Confrontations, Pointed Commentary and Off-Screen Secrets by Dick Cavett
The late night talk show host always seemed a little mysterious and elusive to us. Probably because at his heyday we were too young to stay up to watch him. In Dick's new book he regales readers with stories about a wide range of celebrities including Richard Nixon, John Lennon and Groucho Marx.

8. Betty & Friends: My Life at the Zoo by Betty White
Betty White has written several books about her career in TV, but this one covers her other love — animals. The book's description says it is Betty's "love letter to zoos and to the animals in them." The Golden Girl, who admits to liking animals more than people, introduces readers to some of her four-legged friends including Kelly the gorilla and Gita the elephant.

9. The Garner Files: A Memoir by James Garner and Jon Winokur
Our mother loved James Garner. As a family we watched The Rockford Files religiously. So we're excited to read about his Korean War Purple Hearts and his encounters with Steve McQueen, Marlon Brando, Clint Eastwood and Doris Day — apparently he broke her ribs. Plus it has an intro by Julie Andrews. What's not to love?

10. How I Got This Way by Regis Philbin
Reeg is gone from daytime, but not forgotten. In the weeks leading up to his departure from Live! with Regis and Kelly, the talk show host released a book about his five decades of elbow rubbing. The books includes stories about David Letterman, Donald Trump, George Clooney, Howard Stern, Jack Nicholson and more. Do tell, Reeg.

For related stories check out:
Get Your Friends Chewed for the Holidays
The Dead Celebrity Cookbook