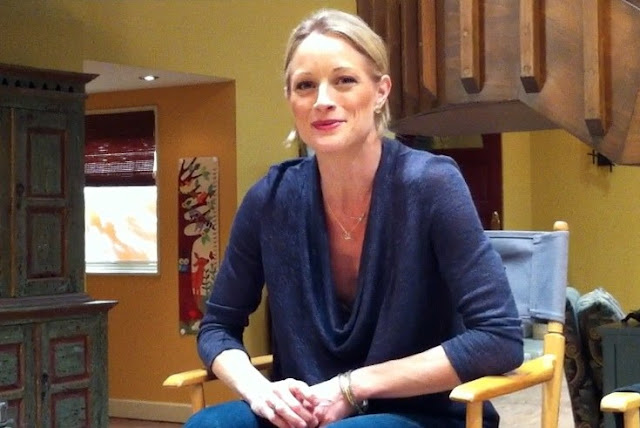 On the ABC sitcom Man Up, Teri Polo once again plays the down-to-earth woman reacting to the testosterone fueled antics of a bunch of guys. This isn’t foreign territory to the actress, who perfected the gig in all of the Focker movies alongside Ben Stiller. At a recent press event Teri talked about the women’s movement and why she thinks men have lost their way.


She discusses the roles that she and Amanda Detmer, her female co-star in Man Up, play on and off set. “The guys are our main characters but I feel like, especially my character, she was the eye of the storm where these people just come into her kitchen and they [swirl around] and then they go out again. And she’s just like, ‘Oh dear God, help me.’ But Amanda and I make sure that it’s not a male dominated set. We are the loud ones and the men are often times very taken aback and we make sure that there’s no inequality here.”

The show was launched on the premise that the main male stars have lost their way a bit and they aren’t as manly as the generations before them who defended the country in World War II and Korea. This generation prefers to sit at home and play video games. Polo chimed in on the state of the modern man, saying, “I’ll get on my soapbox for a brief moment. I have a theory. There’s a very serious, very radical book, which I’m not necessarily advocating at all and saying, ‘This is the be all and end all,’ but it’s called Backlash by Susan Faludi. And it is in essence about a very radical description about the backlash of the women’s movement — how things went to extremes and so then the backlash went to the extreme and men got lost in the middle of all that.”


She added, “It’s also technology. Technology is different. Women are being recognized for having the same abilities in some cases as men do. And so I think that men have gotten a little messed up. I also believe my whole philosophy of the women’s movement is that I think it did go to extremes.”


The single, working mother of two gave her interpretation of the women’s movement and equality. “I would like to be treated with the same amount of respect for being a woman as the respect that they give a man for being a man. I don’t want to pee in the same type of toilet. I do not want to bench press 50,000 pounds. I do not want to have to open my own damn door all the time. Sometimes it would be nice. I really don’t want to buy dinner every single flipping time. There are things that I think are still important, because it’s respect. It’s called respect.”

After all, Teri acknowledged, men and women are not the same. She remarked, “We’re vastly different — physically, psychologically and in so many different ways. But it’s how you are treated, the respect. That is my whole take on the women’s movement and I think those poor lovely men that I love so much, couldn’t live without, are messed up. They’re messed up in what their role really is.”


But that aside, Teri said there’s one really important reason that men and women should tune in to Man Up. “It’s stinking funny. You will watch it and say, ‘I know someone just like that. I’ve been in this situation. I know what it’s like. You will laugh at these people. You will fall in love with these characters because the actors are so good. The comedy is so randomly funny that some line will be blurted out and you’ll go, ‘What? The hippopotamus is purple? Where did that come from?’ And because [co-star] Dan Fogler delivers it, it’s funny. So it’s just stinking funny and you’re going to fall in love with these characters and you’re going to love to laugh at yourself and your friends every week on television. That’s what I would say.”