Ten Things You May Not Know About Meryl Streep 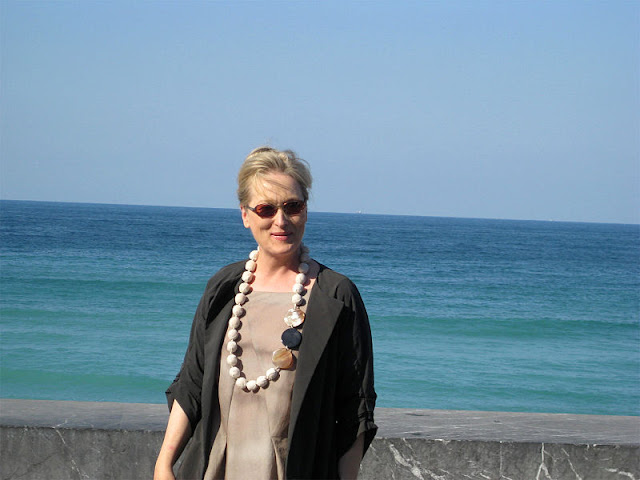 By Andreas Tai via Wikimedia Commons

This month Meryl Streep's new movie Iron Lady debuts. In the film she plays former British Prime Minister Margaret Thatcher. The portrayal has drawn criticism from Thatcher's colleagues and praise from film critics. The latter is no surprise for the woman some claim is the greatest actress of her generation. And yet despite her fame, she manages to stay out of the spotlight. Here are some things you may not know about the Oscar-winning actress.

1. She's a Jersey Girl
Although she can put on any accent ever heard, Meryl is a tried and true Jersey girl. She was born Mary Louise Streep on June 22, 1949 in Summit, New Jersey. Before becoming a successful actress, she waited tables at The Hotel Somerset in Somerville, New Jersey.

2. She's a College Graduate
Meryl studied drama at Yale University where she was classmates with Sigourney Weaver. She graduated from Vassar College in 1971 and also spent a year as a transfer student at Dartmouth College. She reportedly had originally planned to continue on to Law School but after sleeping through the interview, decided fate had another path in store for her.

3. John Willis Saw Her Future
In 1977, after her first major film, Julia, was released, beloved theater and book editor John Willis' predicted Meryl's fate. He listed her as one of twelve "Promising New Actors" in his publication Screen World. Looks like John got that one right.

4. She's a One Man Woman
Meryl has been married to the same man, a sculptor named Don Gummer, since 1978. They have four children. Henry was born in 1979, Mary in 1983, Grace in 1986 and Louisa in 1991. Two of her children are in show business. Henry is an actor, filmmaker and also plays in a band, while Mary is an actress who goes by the stage name Mamie Gummer.

5. She is a Two-Time Academy Award Winner
Although Streep has been nominated for 16 Oscars (more than any other actress), she has taken home only two. Her first was for her supporting role for Kramer vs. Kramer in 1980. The second was as leading lady in Sophie's Choice. This means that the greatest actress of this era has not taken home an Academy Award since 1983. But don't feel too badly for Meryl. Her career has garnered 86 other awards including a BAFTA for The French Lieutenant's Woman (1981), two Emmys for Holocaust (1978) and Angels in America (2003) and seven Golden Globes including one for 2009's Julie & Julia.


6. Her Art Often Imitates Real Life
Streep has played real-life characters on numerous occasions. The roles include Julia Child in Julie & Julia, Ethel Rosenberg in Angels in America, Karen Silkwood in Silkwood, Karen Blixen in Out of Africa, Roberta Guaspari in Music of the Heart, Lindy Chamberlain in A Cry in the Dark, Susan Orlean in Adaptation and Margaret Thatcher in Iron Lady.

7. She Thought Paul Was the Cutest Beatle
In 1990 Meryl had the honor of presenting Paul McCartney with the Grammy Lifetime Achievement award. While giving the prize to Sir Paul she admitted that she went to The Beatles' concert at Shea Stadium in 1965, proudly carrying an "I love Paul" banner.

8. She Learned The Violin for a Part
Though she studied music as a young girl and at one time intended to become an opera singer, music was not in the cards for Meryl. Still years later she did learn to play an instrument. She spent six hours a day for eight weeks practicing the violin to be able to play it convincingly in the 1999 film Music of the Heart. In an odd twist of fate, she was not the first actress that had been given the role. She replaced Madonna for the lead in that film, who coincidentally had beaten her out for the role of Evita Peron in Evita just three years earlier.

9. People Remember Her Name in a Fame Song
In the stage show of the musical Fame, there is a song called "Think of Meryl Streep." The tune is performed by the character Serena, who realizes that she can use all her pent up emotions and apply them to her acting, just like Meryl.

10. She Is Not A Series TV Star, Yet
Although Streep has been in numerous TV movies and mini-series through the years, including Angels in America and Holocaust, she has done very little episodic work. Aside from some one-off guest spots on shows like The Simpsons in 1994 and King of the Hill in 1999, She didn't have a recurring role on a TV series until 2010. She played Camilla Bowner in Lisa Kudrow's Web Therapy on Showtime in three episodes.