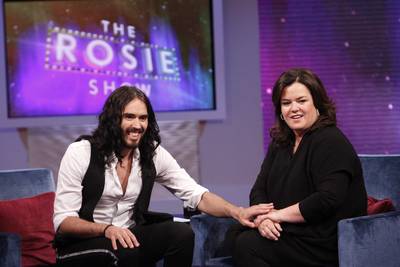 As 2011 comes to an end, we look back and pick our Five Most Inspirational Pop Culture Moments of the Year.

5. Comedy Stars Stand Up to Cancer
Some of comedy's biggest stars came together to raise awareness for Stand Up 2 Cancer. And what better way to call attention to a cause than to use the Force? Yes, that's right. The Star Wars Force. Aziz Ansari, Zach Galifianakis, Bill Hader, Ed Helms, Ken Jeong, Jaime King, Seth Rogen, Andy Samberg, Emma Stone and special guest, Star Wars alumni Samuel L. Jackson were asking fans to "Use the Force for good." In a three-minute video, they re-enacted their favorite franchise moments as only they could. But the organization was hoping you'll do more than be entertained. Viewers were encouraged to donate to the charity, which funds cancer research. In a press release SU2C co-founder Sue Schwartz stated, "With one in two men and one in three women diagnosed in their lifetimes, cancer affects us all. SU2C's mission is to persuade each and every person to support the scientists working to end cancer, and this initiative gives legions of Star Wars fans fun and easy ways to do that."

4. Donald Trump Lends a Little Guy a Hand
Not every deal has to be worth a billion dollars to grab Donald Trump’s attention. Sure the mogul is best known for his grandiose real estate acquisitions and high-pressure reality TV shows. But even the little guy can catch his eye. Such was the case with a ten-year-old boy named Culley Larson. Culley fell on hard times when his bicycle was stolen. So he wrote a letter, pleading with the thief to give it back, reading a note on YouTube that said, “Someone stole my bike out of my parent’s garage... I have said a little prayer for my bike… I also ask God to help someone to make the right decision… I love my dad. I love my family. I love my bike.” The impassioned plea melted the heart of New York’s toughest businessman, Trump, who came to the boy’s aide after seeing the video on Fox News. The Donald called the network and asked them to tell Larson to go out and pick an even better bike and he’d pick up the tab.

3. Cameron Mitchell Chooses His Beliefs Over Fame on The Glee Project
It’s not easy for anyone to walk away from their big break in Hollywood but that’s just what Cameron Mitchell did on The Glee Project. The 21-year-old singer-songwriter had been struggling with how to maintain his own morale values in the midst of certain requests during challenges. Not that he was asked to do anything all that racy, but even kissing a girl led to a tearful Cameron calling home to his mother. Mitchell eventually found himself in the bottom three and asked Glee creator Ryan Murphy to send him home. When push came to shove the potential winner of a seven episode story arc on Glee followed his heart. Mitchell confessed, “In the end it definitely was a decision because of what I believe in and because of how I want to portray myself as and just the lines that I want to draw.”

2. Russell Brand Sheds a Spotlight on Friendly House
Russell Brand makes no bones about the fact that he had a troubled past. The British actor-comedian speaks openly about his past as a drug addict and his stint in rehab. So when he appeared as the first guest on Rosie O’Donnell’s new talk show, it wasn’t surprising that the topic came up. His time in recovery has affected the edgy comedian so deeply that he even filmed a special segment for The Rosie Show. Brand took cameras to Friendly House in Los Angeles, California. He clearly had an existing relationship with the organization’s Executive Director, Peggy Albrecht, who explained, “It has been 60 years that we have been working with women who need help.” In addition to shining the spotlight on Friendly House, Brand was also present a a luncheon celebrating the organization’s 60th anniversary. It’s no surprise he showed up — they named him man of the year. To find out more about Friendly House visit their website.

1. Stars Go Dancing for the Country
When Mila Kunis and Justin Timberlake were at Fox News on a press junket promoting their film Friends with Benefits, the actress was stunned to learn about a YouTube video creating quite a stir on the Internet. Sergeant Scott Moore of the 3rd Battalion 2nd Marines in Musa Qala, Afghanistan, posted a plea to the star, asking her to attend the Marine Corps Ball with him on November 18. Kunis agreed then and there to go with Moore and proclaimed, "We're going to make this happen." Then after a few days of will she or won't she and questions about scheduling conflicts, Kunis' reps confirmed she will make any adjustments necessary to accompany the Marine to the ball. But Timberlake was not off the hook. Just days after Kunis' invite, Corporal Kelsey De Santis, the only female at the Martial Arts Center for Excellence (MACE) at Marine Corps Base Quantico, posted her own video, asking the singer-turned-actor to escort her to another function. They attended the Marine Corp Ball on November 12.

Posted by Pop Culture Passionistas at 9:07 AM