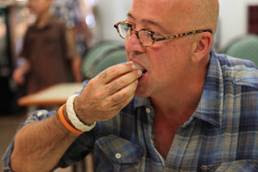 It’s a rare occasion that we don’t envy a TV chef who gets to travel around the world sampling exotic culinary delights. But when it comes to Andrew Zimmern, we’re happy that he’s the one who gets to enjoy a never-ending supply of Bizarre Foods. When the show returns on January 23, he’ll be trekking across the United States doing what he does best — chowing on “delicacies” that most people would never dream of letting past their lips.

In a recent conference call interview, Andrew talked about some of the highlights of the upcoming season. He revealed, “I got to do some really cool stuff. I got to go gigging for frogs and crayfish and cook up a bunch of rabbits and the rest of the stuff that we trap with my friend Don Link in Rayne, Louisiana at the Zaunbrecher Farm — something that I have wanted to do for years.”

He also sampled the local fare in the Lone Star State. Andrew recounted, “I got to go to Austin, Texas, and taste some of the world’s great barbeque. And [I got to] spend some time with farmers like Sebastien Bonneau, who raises his pigeons and his rabbits and his chickens and his ducks with an eye for how they’re going to be cooked. And [he] actually changes his feed seasonally so that his skin crisps up and is more golden than his competitors.”

Andrew also went to the Pacific Northwest. He recalled, “I got to go into the water in Seattle in the far reaches of Puget Sound and actually plant geoduck clams and then harvest them six years later — thanks to the miracle of TV. We went to the other end of the Sound and went to another plot that is farmed by the Taylor Shellfish Company and get six year old geoducks out of the ground that we then took and cooked.”

But the culinary adventure did not stop there. Andrew revealed, “I got to go into famous kitchens with people like Nathan Myhrvold, the author of Modernist Cuisine. I got to do a lot of hunting in West Virginia, one of my favorite states in the country to visit. I got to go fishing with a bow and arrow in Minnesota Lake country with a bunch of guys who go out at one in the morning to shoot 50-pound monster carp with bows and arrows.”

Andrew added, “Then I actually got to eat one, a fish that most people consider inedible. And [I] liked it because there’s a guy who finally figured out how to smoke it skin side up to purge it of all of its fat.”

That isn’t too say that Andrew only consumes edible oddities. He reflected on what he considered his first taste of bizarre food when he was just two years old — a hot dog. And the James Beard-winning TV personality acknowledged that he loves to get into a healthy debate about frankfurters to this day. Andrew remarked, “I always love talking about that issue though. Because most people look at me, usually when I’m at the baseball game with my son at Target Field in Minneapolis. And I’m sitting there watching the game, and some guy chewing on a huge foot long hot dog will come walking down the aisle and he’ll say, ‘I’ve got to tell you, some of the stuff you put in your mouth.’”
Andrew added, “And he always ends up talking about things like eating raw water buffalo with lime juice fish sauce and toasted rice powder with fresh Thai basil and some Chang Mai episode that I did. And he just can’t believe that I would just eat raw food like that in the middle of a jungle. And I remind him that that animal was super fresh, it was delicious. I knew what it drank. I knew what it ate. I knew where it came from. I butchered it myself and that’s more than I could say for the ground up nightmare that he’s holding in a bun.”

And yet he confessed to enjoying a good wiener from time to time. “It’s a guilty pleasure of mine. I try to eat good hot dogs. We’ve got a couple of butcher shops in the Twin Cities that make really good, all-natural hot dogs that I like because I don’t want my kid to have a bunch of chemicals. But when I’m at the baseball game, I can’t control that all the time. And I’m not so much of a food Nazi that I can’t enjoy a commercial grade hot dog at the ballpark. But that to me is a food that is just beyond odd.”

From hot dogs to geoducks, Andrew admitted that if he could pick anything in the world for his last meal, he’d make a surprising choice. He told us, “It would be roast chicken with stuffing and gravy. And I would have preceded it with as many cherry stone clams on the half shell as I could eat.”

See what else he indulges on when Bizarre Foods America with Andrew Zimmern premieres on Monday, January 23 at 10 p.m. EST/9 p.m. Central on Travel Channel.

For related stories check out:
Sunny Sinclair Talks About Her Biggest Loser Makeover
The Biggest Loser's Johnny Forger discusses his time on the ranch