Elisa Jimenez Talks About Her Time on Project Runway 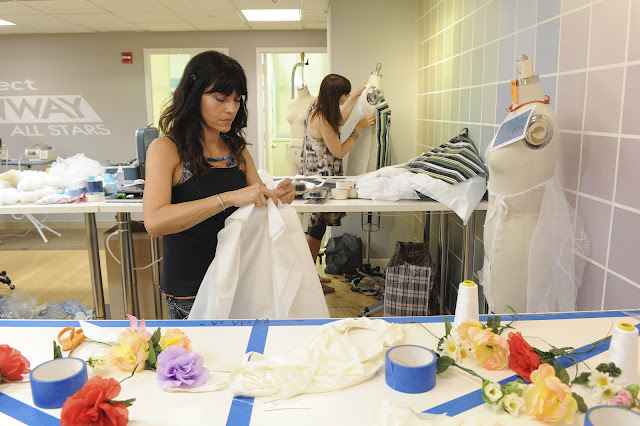 Project Runway All-Stars premiered last week, and while the first episode out of the gate felt a little lackluster, we know Austin Scarlett, Mondo and Rami ultimately will not disappoint. Sadly for viewers, while the competitors are all familiar faces, the judges, host and mentors are all new to the series. Host Heidi Klum has been replaced by supermodel Angela Lindvall. Tim Gunn's mentoring work is now done by Marie Claire Editor-in-Chief Joanna Coles. And Michael Kors and Nina Garcia no longer judge the runway shows. This task is now handled by fashion icon Isaac Mizrahi and designer and former model Georgina Chapman.

In the first episode the designers were charged with making an outfit from items found at a 99¢ store that was inspired by a piece in there current professional collections. While no one's looks were as creative as those from prior seasons' unconventional materials challenges, some contestants faired better than others.

The competitor the judges felt impressed them the least was Elisa Jimenez and she was the first eliminated. The New York designer originally appeared in season four and was sent home in week six. In a recent conference call interview Elisa talked about her time on the show, the new judges and who she wants to win.

Elisa, who has had her own successful business long before appearing on the show in 2008, said coming back to Runway was serendipitous. She recalled, "It was a very pivotal time in my own work and I had actually been putting out into the world that I wanted something that was going to be huge and shift my focus a bit... And wouldn't you know that same day that I did the meditation I got the All-Stars request." Elise said she consulted her daughter, who she called her "number one advisor," and decided to do the show again.

During the challenge, Elisa chose to make a beachy, short-shorts outfit and a top with her signature wings. As the model walked the runway and opened her arms, the wings exposed prose written on both sleeves. She received mixed critiques from the judges — some thought it was very creative, while others thought clothing shouldn’t need to be explained.

Elisa defended her design. "I actually stand by the piece I did," she declared. "The explanation wasn't so much in relation to the story that's actually on the wings and on the clothes. There's a whole series called The Storytellers Series and it's actually a story. So that was me more just being nervous on the runway and explaining some of the construction ideas that I have while I'm working. So out of context of the runway it looks like I'm explaining the dress but actually I was just getting nervous and explaining more about the dress than I needed to explain."


She continued, "What I was really proud of is that I think the work stands for itself, both the first dress that I showed from the collection and also the second reinterpretation of the unusual materials challenge… I agree you shouldn't have to explain your work both in a gallery, a museum or on a runway. So I thought that was a very good example and a good lesson. The critique was good for not just myself but for everybody. But I still think the work is amazing. I wouldn't have changed a thing."

Elisa, who comes from an art background rather than formal design training, has an unusual approach when creating fashion. She did feel that at times she was being assessed more for her technique than for her designs. She remarked, "When you have such a highly intelligent and well respected woman like Joanna Coles come up to you in the first conversation she's having with you about your process, you know that somehow the dialogue has shifted — that your whole method is coming in to your critique, not what you make. So in that way I had to be very centered and be like, 'I have a different way but I still make good work. So let's talk about the good work because that's what we're here for.'"

While viewers may be missing Tim Gunn as the designers' mentor, Elisa was happy to welcome Joanna into the work area. "Tim, he's an impeccable mentor... However there's something about the fact that [Joanna's] a woman and she's a mother and doing her career and her life and there's a different kind of camaraderie, more for me to listen to her opinions. No offense [to Tim], it's just that she's living a life that I can relate to."

As for the comments from the new judges as opposed to the old ones, Elisa was happy to have them on board. She commented, "I've been part of the fringe of fashion for so many years, Michael Kors already knew my work. Tim Gunn already knew my work. Isaac Mizrahi already knows my work. And so it's just more of a different voice. The thing for me personally, I truly respect Mr. Mizrahi… His dialogue really meant a great deal because we're connected with actually admiring his work and finding him to be someone in fashion who has constantly reinvented himself… So for me it meant more."

Despite being eliminated Elisa plans to continue to participate in the show from home. She said, "I'm going to actually try to do the challenges with each of my colleagues each week just because I want to do them because I think it's interesting." She got the idea from her students who form small groups and come up with designs each week as they watch the show. Elise added, "I was really inspired by that because they're not going to get a prize. They're just doing it because it's fun. So I'm going to do that as well."

And while her chances of winning are gone, she does have a favorite competitor she'd like to see go all the way. She confessed, "I'm rooting for Austin. Everyone's talented. Everyone has skills and a history, obviously. But Austin Scarlett is this incredible example of very intelligent, well-read historically-based, talented young man. And also within the context of Project Runway he was part of the first season and a creator of what Project Runway could be... He's one of the pioneers… Nothing against the others designers. I'm impressed by his talent and impressed by his intelligence. He's such a kind, intelligent gentleman and that's so rare these days."