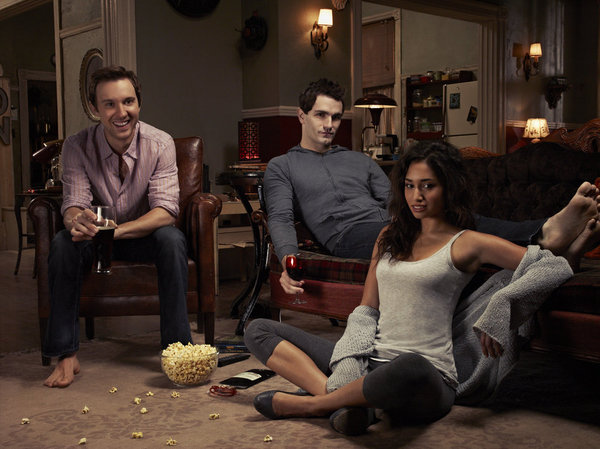 Jeremy Carver is the executive producer of the U.S. version of Being Human, a Syfy program based on a U.K. show of the same name. In a recent conference call interview, Jeremy talked about his supernatural show and what’s in store in season two for his cohabitating vampire, werewolf and ghost.


Last year Being Human followed closely to the storylines of the original U.K. show, but Jeremy explained that that will change this time around. He revealed, “Given that the show obviously has its roots in the British version, there's always going to be an inevitable crossover just by virtue of swimming in the same pond. But there was a great effort to make the series as original as possible this year given that its roots are still in the BBC version.”


As a result, he gave a sneak peak of what’s to come this time around. “The underlying theme of the season is each of our characters is being tempted by something that is leading them down a darker path. And one of the things that we're playing with is that in trying to become more and more human they are in actuality being forced to confront their monstrosities more than ever.”

Jeremy continued, “Whereas last year you maybe had a few of the characters going down darker paths and being able to rely on the other characters, this year each of our three main characters is being enmeshed in a darker path… There's a little bit less of a safety net this year in each other, in that basically what do you do when you're falling, falling, falling and your support system isn't necessarily there for you when you need them.”


The executive producer went into a bit of detail about what each character will face in the future. He started with resident vampire, Aidan McCollin played by Sam Witwer. He remarked, “Aidan is basically confronted with the fallout from the death of Bishop, who he killed at the end of last year. And we are introduced to another aspect of the vampire hierarchy in current day America, which involves this overall leader known as Mother… Mother basically is going to essentially offer Aidan his freedom if he agrees to train her disgraced vampire daughter to be the leader of Boston.”


Jeremy added, “So that opens up a whole can of worms in terms of Aidan having to deal with this pretty unpredictable daughter, who he has known frankly, for about close to 100 years. Along with that we're going to be introduced to Aidan's vampire protégé, who is basically the last vampire Aidan ever turned and that was back in the early 20th Century. He makes a return to Aidan's life.”


Being Human will welcome several of these new characters this season. Jeremy explained, “That's the character of Henry. It's played by Kyle Schmid, while the character the vampire daughter is played by Dichen Lachman from Dollhouse. And both of these people will greatly, greatly complicate Aidan's life and will play a major part in leading him down this dark hole that he may end up going down this season. We can also expect in Aidan to see the return in a way that we don't want to spoil, but we can expect to see our character of Bishop returning in a certain way this season as well.”


As for Being Human’s werewolf Sam Huntington (played by Josh Radcliff), Jeremy acknowledged, “Josh of course is dealing with the fallout or at least is totally unaware that at the end last season, that he scratched Nora when he turned into a werewolf. And so as we come into the new season, we find Josh and Nora both anxiously awaiting the rapidly approaching full moon, neither knowing what's going to happen. The results of which have an explosive effect on their relationship, plus we'll see some more people from Josh's past reenter the picture in a surprising way.”


Jeremy expounded on what will happen to Meaghan Rath’s ghostly character, Sally Malik. “As for Sally we've got a ghost who considerably missed her door last season. She chose not to take that door or at least she chose to save Aidan instead and she deals heavily with that fallout. And she will be introduced to basically lots of new ghost characters this year who will be tempting her with new, spectral temptation that will also lead her down a much darker path.”


He continued, “Sally, as well, will have a certain number of folks from her past in unexpected ways. So everyone is dealing with not just new and twisty monster things that come from a natural extension of being the type of monster they are, but also dealing with people that they dealt with in a ‘previous life before they were monsters,’ except Aidan. Aidan is with mostly people he's dealt with as vampire.”

For other pop culture news check out:

The Ambush Cook Kristina Kuzmic Makes Her OWN Debut

Rosie's Back and Better Than Ever