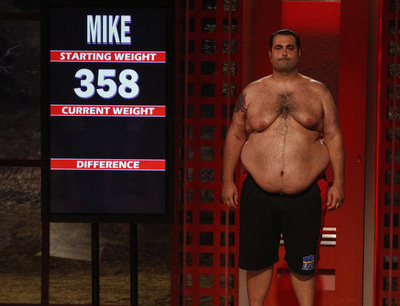 Things got very interesting during the second week of The Biggest Loser season 13. A challenge left the Red Team with the huge task of losing a combined 94 lbs. in order to gain a five-pound advantage. If they did not reach the goal, the Black Team got the extra weight applied to their numbers on the scale. Unfortunately things did not work out as planned for Dolvett Quince's team and the Red Team found themselves in the elimination room.

Surprisingly it was not the two women who got them in the predicament that were on the chopping block. Both Kimmy and Kim found themselves safe for another week, while Mike Messina was sent packing. It seems his teammates thought he wasn't giving his all and had a bad attitude. In a recent conference call interview, we talked to Mike about his time on the ranch and the challenges of being home.

Mike did confess that the tension this season, that seemed apparent to those watching, was real. The intense competition between trainers Dolvett and Bob Harper was heightened and the players were very anxious. He revealed, "I would say there was a fair amount of tension on the ranch." But commented, "I was more focused on my own journey there, than everybody else's stuff. And the drama happened and drama was happening around me and I was just trying not to get involved in it because I had my own personal battle with myself going on. So I wasn't really paying attention to everybody else."

But despite the obvious rivalry between Bob and Dovett, Mike was grateful for his time in the gym, professing, "Dolvett is a great guy and he's a great trainer. I was happy with Dolvett." And the tensions did not get in the way of his experience. He stated, "It had its moments. I did enjoy many things, the camaraderie, the excitement, the anticipation of what was to come as far as your success and the accomplishments that I felt like I was going to make there. So I did enjoy it."

Besides weight loss, Mike also had a second challenge that no other players were contending with. He was trying to quit nicotine. As a way to get off cigarettes, he began chewing tobacco, but admitted this was just as bad a habit. He said he is still battling both issues now that he is home. "I'm staying focused on the positive as much as I can. Food is a funny addiction because you have to eat. Nicotine it's not a survival thing it's more of a nervous habit that you can say no to and survive. But if you say no to food then we all know you die. So it's tough. And I would say that food is definitely a harder thing to deal with than nicotine."


He said he has a few things that help with in the nicotine battle. "The acupuncture is helping. The patch is helping. And the biggest thing that's helping is my daughter. The only thing she asked for for her birthday, which is February 1, is that I quit chewing. So that's a pretty good present for her and I'm excited to give it to her."

Mike has lost a total of 72 pounds since starting The Biggest Loser and takes his journey one step at a time. He noted, "The challenges I face being home, the old temptations everywhere and people eating things that I used to eat and not wanting or able to eat those because I have a mission. And that's been tough, seeing my addictions in front of me and at any time I could just grab it and eat it but mentally, emotionally and spiritually I know I can't so that's a little rough."

But when times get rough Mike reaches for his favorite treat of late, "An apple and a little baby bell of cheese is like an apple pie. It's the most interesting thing I think I've ever eaten. So that's my sinful pleasure."