Our Day on the Set on Work it 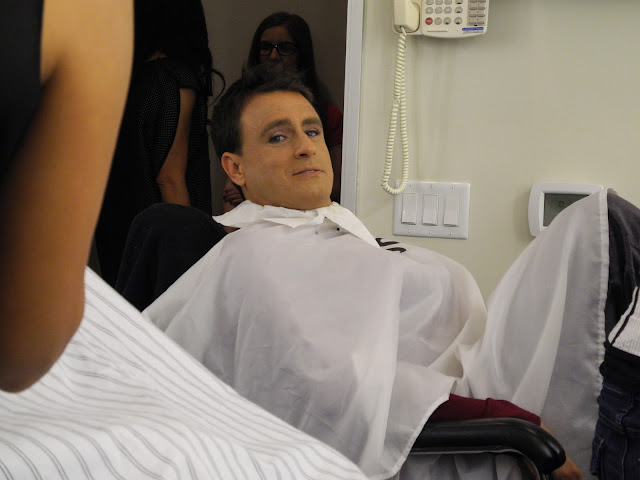 A few months back we had the chance to spend the day on the set of a new ABC series called Work It, which premieres tomorrow night. The basic premise of the show may sound slightly familiar, two men dressing as women and hanging with a bunch of girls. But if you think that sounds like a remake of Bosom Buddies, look a little further.

In Work It, Lee and Angel are unemployed autoworkers who have not been able to find employment for over a year. Desperate, they dress in drag to interview for two spots at an all-female pharmaceutical company. The two stars, Benjamin Koldyke and Amaury Nolasco, are almost too young to remember the Tom Hanks/Peter Scolari sitcom. Amaury told us he didn’t get the show growing up in Puerto Rico but did watch it after being cast on Work It.

But he was quick to point out, "The circumstances are completely different… We're touching a topic that is very much alive and very much true, which is the whole economy and the whole recession. And how probably a lot of people will relate to the fact that, 'I can't get a job so I'll do anything." And these two guys will do anything to get a job. And it's sad to think about the extremes, but we don't know what people are doing out there. This is kind of funny but really there might be people doing this. We have no idea."

He continued, "It brings an element of the whole family, trying to support the family. It's showing why he's doing it, which it was never clear on the Bosom Buddies... The only resemblance here is it's about two guys dressing as women because they need to in different circumstances."

He does hope that Work It will have one similarity to its predecessor. "It still holds on and Tom Hanks came out of there. It's a show that a lot of people remember. You remember it because it was good. And I just hope we can follow in those footsteps and take it even further."

While on the set we got the chance to watch Ben and Amaury transform into Lady Lee and Lady Angel. We chatted with them as their five o-clock shadows were covered with layer after layer of make-up, Amuary's bald head was hidden by a long, silky wig and the stockings, undergarments and high heels were put on.


Ben talked about preparing for the switch, "I channel my mom and my sister." But aside from the acting techniques, he admitted, "Quite literally, once I put on the boobs it all starts to happen. The physicality of it really does make it work. Boobs are powerful. About the third week I requested I have bigger ones. I could then understand for the first time the whole idea of plastic surgery. I get it and I know it's probably not the best thing and I also understand the argument against it, but when I had bigger boobs my life changed. I was more powerful. I was in more command of every situation."

Amaury agreed, "The minute you get the wig and the boobs it becomes another character. It's a character that I'm having an amazing time playing. I'm having way too much fun sometimes."

He said that over time during filming they are becoming more and more accustomed to the women's clothing. He confessed, "We're getting more comfortable being in these characters. I'm getting too comfortable sometimes to the point that I'm enjoying more being the girl than the guy."

He explained, "It's not who I am. So as an actor I get to play. I get to be somebody that I would never be. I get to have hair. It's like giving a kid Play-Doh… Having the ability to play and have fun. And the whole thing of going back and fourth is challenging but we're having an amazing time, which is why I'm feeling more and more comfortable. Hopefully you guys will see an arc, a transition."

To Ben the most difficult part of becoming a woman, is a certain piece of lingerie. He declared, "The underwear is really by far the most uncomfortable and challenging thing." But he has come to the realization that many women have discovered — it is the only clear way to avoid panty lines.

Amaury has found another challenge with his role. "Keeping the voice is one of the things that I'm having trouble all the time." He joked, "I have this manly radio voice."

He continued, "There's an episode, it's very funny, because we switch back and fourth so much from boy to girl. Even when we're dressed, we'll speak as boys sometimes when we're alone. And when the girls show up we talk like girls. Sometimes I don't even know. I come into a scene and I go, 'What am I, a boy or girl? I don't even know anymore."

Although he makes a very striking woman, when Amaury is dressed as a man, he will be very recognizable to the fans of his most recent show, Prison Break. When we asked what his fans would think of his new role he stated, "I hope they embrace it. Sucre was a phenomenal character that I love and dearly miss, but this is my new baby. This is somebody that I've put a lot of effort and a lot of sweat in and being able to do something completely different as an actor to be able to play that."

He added, "My fans of Prison Break will hopefully be very supportive and they'll be very proud to see a completely different character than what Sucre was. Sucre was Latino, macho, crazy about my girl and very loyal to his friend. He was a guy's guy. Here we see a complete departure from that. You guys are in for treat."