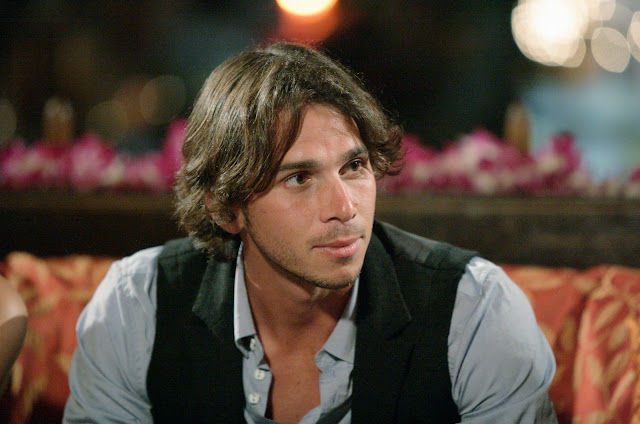 
There’s no doubt about it, Courtney Robertson may go down as the most controversial Bachelor villainess in history. But in a recent conference call interview, host Chris Harrison cautioned that fans shouldn’t snap to any quick decisions about the model who seems to have skinny-dipped her way into Ben Flajnik’s heart.

Chris warned that it might not be fair to judge Courtney based on the fact that she’s been aggressive with Ben. “I've been doing this for years, and nothing is that simple when it comes to anything, especially relationships. And the fact that Courtney is playing this game — and love is a game, there's a certain game element to it.”

He continued, “Does it rub us the wrong way? Apparently, it's not popular. And so apparently, she's had success with this type of action, this type of game, her whole life. And it's working. She's gotten Ben's attention. She gets affection. And I'm guessing she's gotten attention and affection from guys for quite some time using this method. And it's hard to fault her, because it's working like a charm. But man, it's unpopular. And she's not going out of her way to ingratiate herself with the other women.”

One thing is for certain, Chris believes that Courtney isn’t thrilled with some of the choices she’s made while on the series. He acknowledged, “I think that Courtney is probably like, maybe like Kasey on Bachelor Pad. I don't know if you remember this summer on Bachelor Pad when Kasey [Khal] watched the show. When he came back to the reunion show and he said, ‘Man, I've been watching. And that's not me. I apologize for that.’ And I bet Courtney would be a little bit like Kasey in that, I bet she regrets some of the things she's done and said. I think she's gotten caught up in the moment a few times.”

Luckily Harrison has the perfect forum in which Courtney can address her actions. “I hope to see her at Women Tell All. And hopefully she'll come back, or any of these reunion shows. And I would love to talk to her. Because I don't know if it's because I'm older and wiser. And I've been doing this for ten years. But I am very slow to judge these people of just this black and white. Of okay, you're the evil person. You're bad. You're good.”

He conceded that being under the microscope has a role in the way people act on the reality series. He noted, “This show does strange things. It puts you in a very, very strange atmosphere and situation and environment that it's hard for people to understand. And I very much do understand it. And so the things that Courtney's done to get the attention from Ben. Some of it, I actually respect.”

Chris actually gave Courtney credit, saying, “She's done a good job of fighting for this guy. But I also think that she will admit – and hopefully will admit – that she went a little too far. And some of the things that she said were inappropriate. And they were rude. And so I think she doesn't owe him an apology, but I hope she would come up with a little bit of an apology to several people on the show.”

He gave a sneak peek of what fans can expect in upcoming episodes. “The proof will be in how this plays out in the next few weeks. And the proof will be in the future and what happens. And the decision he makes… One of the things I love is that, it's up to Ben. And it's up to whoever the Bachelor and the Bachelorette is to figure out, are these people here for the right reasons? And in any walk of life, you have to decide, is this person using me for my money? Are they using me for whatever?”

This is the million-dollar question for Ben. As Chris stated, “In this case, do you think Courtney is here to get her 15 minutes and become a model? Or whatever. You have to decide those things. And Ben is going through that right now with her. And coming out next week in Belize we kind of have that ‘Come to Jesus’ meeting, so to speak, where they have it out and figure it out, because more than one girl now will be coming up and warning Ben about Courtney.”

And yet, things might not be what they seem. Chris cautioned, “At the same time, what Ben has to figure out is, are these girls jealous of Courtney because she's getting so much attention and she's dominating the game so far? Or are they really looking out for him. So there's a lot of stuff for him to weigh.”

Watch as Ben gets closer to figuring it all out on The Bachelor every Monday night at 8 p.m. EST/7 p.m. Central on ABC.

The Bachelor's Monica Spannbauer Dishes on the Other Girls