The Biggest Loser's Adrian Dortch Talks About His Non-Profit Work 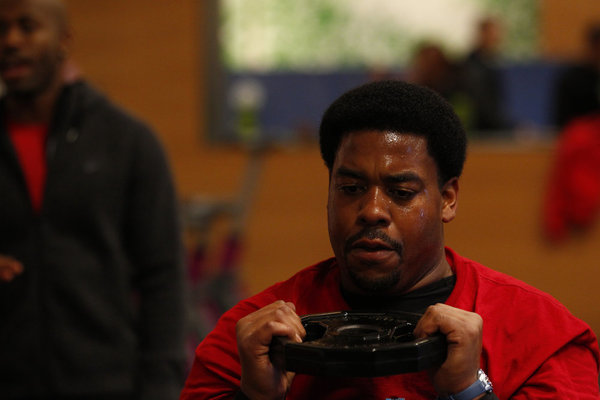 Adrian Dortch found himself in an especially tough spot on The Biggest Loser. The very first night he and his sister, Daphne, were sent home without stepping one foot inside the gates of the famed ranch. They were given one month to lose 50 pounds on their own to regain a spot in the game. And they proceeded to shock everyone by doing that and more.

But the players were not what you would call welcoming to their new teammates. In fact they made Adrian's short time on the ranch down right miserable and voted him off the first chance they got. But viewers everywhere were feeling for the guy, taking his side in the battle against The Biggest Loser mean girls. And in a recent conference call interview the eliminated contestant shined a light on where his good attitude and zest for life comes from — giving back.

At home in Evanston, Illinois, Adrian runs a non-profit called Entrepreneur Endeavors, an organization he started in 1997. Having grown up in a rough neighborhood, Adrian credits two music producers with turning his life around. "Jim Tullio and Butch Stewart — they do commercials and jingles, and they actually did Oprah’s 'Run On' song in the year before that — they were my mentors… I wasn’t into singing or producing, but they pulled me to the side and they seen I had a voice. They seen I had talent. So it pretty much saved me from my community. And at the time… there were some guys that I probably shouldn’t have been hanging around, so they pretty much saved me. So music saved me and then showing me not only music but the business part of it saved me."

And so he was inspired to give back. "I started volunteering for not-for-profits. And then, I said, 'Hey. I can probably do this myself.' So I started my own not-for-profit in 1997 called Entrepreneur Endeavors. And the basis of this is to bring all kids in any kind of walk of life. Any kid. It’s beautiful because no matter color, race, what have you, everybody loves to do this. So that’s the foundation to get them in, to come in to see what’s happening. Then I figure out individually what they love doing. And so if one likes to be a doctor, I’ll find a doctor and reference them to a doctor and they’ll go and they’ll have an experience with that doctor and come back."


He continued, "So it’s starting these kids to harness their passion and figure out what they want to do at a young age… So that’s pretty much what Entrepreneur Endeavor does. We strengthen and we help families. We just added a wellness portion to Entrepreneur Endeavors that when my sister does come home or after finale, she’s going to help out with the girls. But right now I’m working with guys and girls and we’re losing weight and we’re eating healthy."

He brought a little piece of Entrepreneur Endeavors to The Biggest Loser ranch, as well. Each week during weigh-in he would have a color-coordinated ascot tucked into his t-shirt. He explained the significance. "Everybody does skinny ties. And if you wear a bow tie you're just Pee Wee Herman-ish. The ascot was so prestigious and clean. And so not only is it an ascot, but it’s beautiful, and it’s actually my own line — Ascot by Adrian. And so everybody wears ribbons for cancer. When you wear this ascot, not only are [you showing] a great fashion sense, but you're actually supporting families and kids in the community or the community next to you. I take money from Ascots by Adrian and I run my not-for-profit Entrepreneur Endeavors."

Aside from Entrepreneur Endeavors, Adrian is busy working towards his ultimate Biggest Loser goal of taking the at-home prize. He said he would use some of the winnings to "do something nice for my mother and father. They’ve always took care of me and looked out for me, and it’s like I would love to do something for them." But it is his organization that will benefit most. "Ultimately I would like to put the money back into the not-for-profit and get even more kids and help even more kids and more families, and not just my community, but the community at a large."

Adrian offered some advice to his kids at his organization as well at to Biggest Loser fans, "You don’t have to wait for The Biggest Loser to come along... You can start getting healthy today just by making simple choices. You could still have all the foods that you love, you just got to have them different… There’s so many alternatives that you can replace what you're actually eating… You don’t need a trainer... All you need is an hour a day or 30 minutes a day. You don’t have to go the extremes… You can do it little steps at a time getting healthy. It’s very doable."