Adam Wylie: The Actor Who Never Grows Up 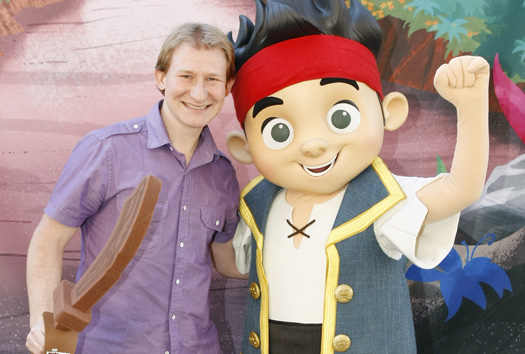 You may remember Adam Wylie as the youngest kid on the TV series Picket Fences back in the '90s. Or maybe you saw him on Broadway in Into the Woods. Personally, our favorite Adam roles were the Skinny Kid God in Joan of Arcadia and Brad Langford on The Gilmore Girls. But despite numerous juicy roles and 23 years in the business (he started acting when he was four), there is one character Adam always dreamed of playing — Peter Pan.

Well now Adam is getting that chance. Tonight Jake and the Never Land Pirates: Peter Pan Returns premieres on the Disney Channel and Adam is voicing the iconic boy who never grew up. In a recent exclusive interview Adam talked about being the boy who never grew up on TV and in real life.

Having tried out for the role once before and losing to Lost's Matthew Fox, Adam feared this audition might not pay off either. He described walking in to the audition room, "I remember being in there and seeing some really, really top notch guys in the waiting room going, 'Oh my god, they're perfect. Dang it... There's no way that I'm going to have a shot at this.'"

Still he gave it his all and was happy with his audition. But he said that when the producers are watching you from behind their glass wall, "You can never tell." He explained, "They're discussing how much they don’t like you — that's what's going through your head." But in reality they were very impressed with him. He recalled, "Two days later I found I was going to be Peter Pan on Jake and the Never Land Pirates and I was super excited because it was a dream come true."

But even though he had hoped to play Peter Pan for a long time, Adam approached this audition in the same way he does every try out. "You need to go into an audition thinking it’s another chance to perform material and have fun and see where it goes from there and see if something happens. I think of every audition as a one-time show, if you will. If I get to do a second performance, or more performances, then fantastic."


He continued, "The audition is always the work of acting, where as getting the job is really the vacation and the time where you get to have fun and let loose. There's no stress and worries of, 'Am I gonna book it?' And if you can get over the 'Am I gonna book it?' aspect then you've already won pretty much."

And this time Adam won the role of Peter Pan. He admitted that there's a lot of the character in him. He confessed, "I play in a kickball league for starters, which is one of the many geeky things I do. I'm also a professional magician, another childhood hobby that stuck with me. I'm a huge fan of games and playing board games and card games and video games… I love to goof around and have a lot of fun with life but at the same time I've got responsibilities just like every other adult in the world. I do that when I have to and then all the rest of the time I try to be as fun and happy going as I possible can be."

Like Adam, most adults can relate to Peter Pan, which may explain the iconic figure's longevity. Adam stated, "I think the character of Peter Pan remains popular because he possesses qualities that everybody wishes they had still… But then real life responsibilities come into play and unfortunately that tends to overshadow everything else in your life. It's nice to think of your life in a fun, carefree type of an environment while being slightly older. That's what Peter Pan is. He's the perfect mix between fairy tale and real life."

Adam gets to blur the line between fairy tale and real life on an almost daily basis. And he performs in so many areas of show business that we had to ask him if he had to choose one, what would it be. He replied, "I do so many things in my life and I have so many different hobbies and I have so many different things that I'm interested in… that it's hard for me to pick one of anything, let alone pick one side of the business that I like the best. Because A, I feel like everything else would feel bad if I pick one. I know that's weird to give emotions to things that don’t have emotions, but I somehow do in my head. And B, I know I would miss the ones that I wouldn't be doing for that amount of time."

He has spent a year doing a play and missed being on camera. He has stopped doing theater and longed for the instant gratification he gets from being on stage. He recalled, "When I didn’t do voiceovers for a period of time, I missed being anything I could possibly want to be from a super hero to one of the greatest characters of all time to a little boy to a monster. So I don’t think I really could pick just one. To me all of them are kind of the same thing. They're just all a different way of performing. And I think if I wasn't performing I would somehow find a way to still do it."

To watch Adam fulfill his dream of playing Peter Pan tune in to Jake and the Never Land Pirates: Peter Pan Returns, tonight at 7 p.m. EST/6 p.m. Central on the Disney Channel.

For related stories check out:
The Passionistas Speak with a Pop Culture Icon
Jessie Has a Cast of Poised Young Stars