The Stars of Body of Proof Share Their Autopsy Experiences 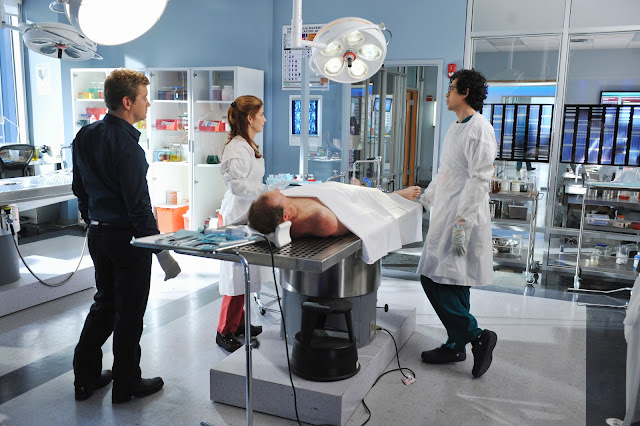 Body of Proof’s Dana Delany, Nicholas Bishop, Geoffrey Arend and Windell D. Middlebrooks are living most actors’ dreams — starring in a hit TV series with a really easy-going and fun-loving team. But there is one thing that some might consider a drawback for the talent on the show. The cast had to participate in real-life autopsies to research their parts. At a recent press event they talked about their experiences.

Nicholas, who plays medical investigator Peter Dunlop, recounted, “We were totally suited up in the stuff that we wear on the show. So you’ve got triple gloves and you’ve got the suit and you’ve got all that stuff because you can’t have any contamination or anything. But I did have my Starbuck’s with me.”

The off-camera staff tried to prepare them for what was about to happen. Nicholas noted, “They did warn us that when they… cut the stomach open that’s going to be really bad. But apart from that you’re so overwhelmed by what’s actually happening in front of you that I didn’t really get emotionally attached or involved. It was just like watching someone take apart a brilliant piece of machinery.”

Submersing himself in the graphic procedure had not been a life-long dream for Nicholas. He confessed, “I’d always been quite grossed out by those medical shows. But when you have the opportunity to do it, who wouldn’t want to — well, not who wouldn’t want to do that, a lot of people probably wouldn’t want to do that. But it’s one of the greatest things about being an actor is you get closer to these incredible experiences. And so when the opportunity came up I was still wondering whether I was going to pass out. But I didn’t. It was just extraordinary.”

His co-stars Geoffrey and Windell had polar opposite reactions to the proceedings. Windell admitted that during the autopsy they observed together, “He loved it and I was like a puppet.”

He added, “I was literally in that room, in a mask… They really wrapped us up and stuff because there was something going on with the body.” The “something” was infectious hepatitis that carried on in the bloodstream, even after death.

But that fact didn’t hinder Geoffrey’s enthusiasm. He laughed, “It was like a scene in the show. I was like happy, taking off the thing. I said, ‘Let’s go get breakfast.’”

Windell eventually became more comfortable with the situation. He recalled, “It is something amazing… It kind of moves out and you are just drawn to the body. You even got to saw the skull.”

He continued, “I loved watching him do it. Yes, that was wonderful. There was something that was amazing about it. So they were very good with helping us to ease in at your own pace. And so us getting to do that together, really affected how we work together on the show.”

Geoffrey joked, “It was an autopsy and one time at David and Busters. Really built the firmament of our relationship.”

But Dana Delany was the star who really took to the process with the greatest vigor. Nicholas remarked, “She absolutely loves it, which is very good. Because obviously it lends herself to having more credibility for her character as well.”

Geoffrey described a friendly, on-set competition between Dana and one of her co-stars. “She and Jeri [Ryan] have this little rivalry between who’s the biggest nerd, which is really funny. I like that a lot that the there’s these two pretty and hot women like, ‘I’m a nerd. No, I’m a bigger nerd.”

Windell said only one experience has dampened Delany’s eagerness so far — a rat autopsy. “Dana, who loves to cut, who loves to play — now the rats even she paused… She was like, ‘Okay, I gotta take this in. I think it’s something about rodents.’”

Dana conceded that this wasn’t her favorite experience to date on Body of Proof. She reminisced that she eventually enjoyed the experience, saying, “I did a rat-opsy. I did the rats. That was fascinating – teeny, teeny, teeny little intestines. And then we opened a brain up and I got to do the whole sawing thing… The rats made me pause. They did. We had snakes this season and we had rats and those are the two things I don’t love. But once I cut that sucker open, I didn’t care. It’s the tail. It took me a while to get past the tail. Something about it is so primal. We’ve all had one at some point. But otherwise I don’t get grossed out. The crew makes fun of me now because they know that the minute there’s going to be anything disgusting, ‘Oh, Dana’s going to be so happy.’”

The Bachelor's Monica Spannbauer Dishes on the Other Girls