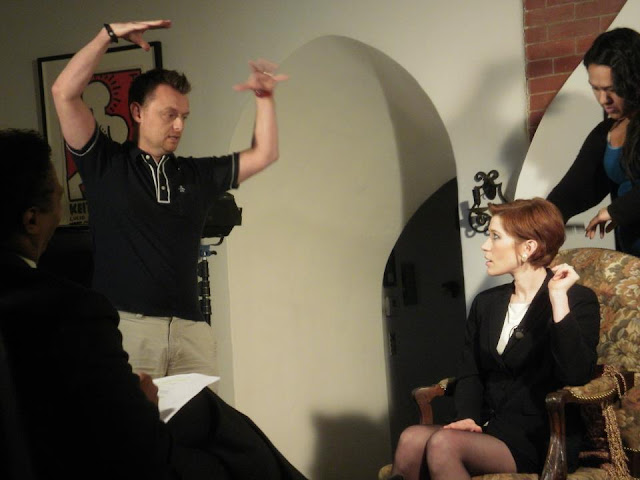 With the Wills and Kate hoopla behind them, it’s time for royal watchers to turn their attention to the little talked about sovereigns of Arch Knockardy. At least that’s what the public relations firm of Law & Menin will hope they’ll do. The PR masterminds have a very simple mission — to make Arch Knockardy the hottest holiday destination in the Pacific. Never heard of Law & Menin or Prince Marco? That’s because they are all the product of writer-director Maxime Brulein’s imagination and the subject of his next film project, Postcard from the Palace.

Brulein explained how he got the idea for the monarch mockumentary, “The concept of the movie started many years ago, when my best friend in high school and I would write little short stories about an island called Arch Knockardy. The name of the island was based on one of our friends, whose last name was Knockaert and who we loved making fun of. One of these short stories involved a 12-step program in which ordinary people were taught how to become an instant celebrity.”

A few years ago the inside joke took a more public turn. Brulein recounted, “My friend came to visit me in California. We decided, as a joke, to make official looking photos of her and HRH Prince Marco of Arch Knockardy. She posted these on her travel blog with a whole article about her visit to the ‘island.’ The pictures and the text were so believable, that people started to email her, asking her how the hell she personally knew a royal. The joke was pushed further when HRH Prince Marco had his very own Facebook page.”

What started as teen teasing, is now going to become a feature film. Brulein has launched a campaign on Indiegogo to kick things off. He’s hoping fans will help him meet his goal by the Friday, February 24 deadline. To get a taste of Brulein’s creative talents, movie and reality fans alike can check out his web series The Next Top Super Spy, which he described as “a not so real reality show about seven actresses competing for the ultimate part of a super spy.” And of course, they can “Like” HRH Prince Marco on Facebook.

In true indie film financing fashion, those who donate will not go unnoticed. Depending on the level of their contribution, angels will be able to choose from a variety of official titles. For $10, they can become a Knight or Dame. A $50 contribution will earn the monikers Viceroy or Viceriene. And for a generous pledge of $5,000, a benefactor will be dubbed Emperor or Empress and become the “ultimate ruler” of Arch Knockardy. Besides a fancy (albeit fake) title, each of the twelve perk levels also comes with prizes ranging from a special certificate from the royal palace to a walk-on part.

Visit the official Postcard from the Palace: A PR Story Indiegogo and Facebook page for more information.