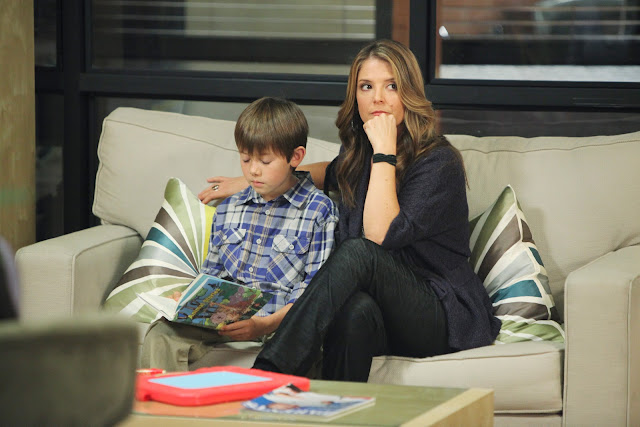 A.J. Langer has been acting since the age of thirteen. She was a teenager when she appeared on shows like Blossom, The Wonder Years, Baywatch, Hangin' with Mr. Cooper and Drexell's Class. And she was just 20 when she starred in My So-Called Life as Rayanne Graff. So she knows a thing or two about starting out in the business at an early age. Now as a recurring guest on Private Practice, playing Cooper's old flame Erica, mother to his son Mason, she can pass her wisdom on to her twelve year-old co-star. In a recent exclusive interview, she told us about getting the part on Private Practice and working with Griffin Gluck who plays her son.

A.J. informed us that after working for close to two decades, she had taken a long period of time off to begin a family and was unsure what direction her life was headed. "I had taken four or five years off to have babies… and also to get healthy and figure out what I wanted to do with the rest of my life, not knowing if I wanted to get back into acting. And then decided I'd get back into classes. And see what happens."

She said she studied for a bout a year and "decided this is what I do and where I need to be." And so she began auditioning again. She stated, "I was very reassured that people remembered and were enthusiastic about having me."

When she got the part of Erica on Private Practice she figured it was fate, "I said that I wasn't going to put any pressure on myself to work until my son was two and that was the week of my son's second birthday."


She said she was drawn to one particular quality of the character, "Chutzpah… and what seems like a very well developed character for a guest… Erica seemed to have more just depth than the normal guest star and strength that I dug… There was something exciting about her for me."

Erica was just supposed to have a two or three episode arc, but the producers must have seen something they liked in A.J. because they have expanded her storyline. So far she has been on ten episodes. When she first appeared, she showed up on Dr. Cooper Freedman's doorstep with the eight-year-old son he did not know existed. But when that arc ran its course, they came up with another reason for Erica to stick around. They gave her a brain tumor. Last week she starred in a very special crossover episode with Grey's Anatomy and Dr. Derek "McDremy" Shepherd operated on her tumor. She stated, "I'm very grateful to have had such a good run and arc and experience with a really cool show."

Most of A.J. scenes take place with her TV son, Mason, played by Griffin Gluck. She had nothing but praise for the young actor. "He's awesome. We hit it off right away. He's a real kid, which is refreshing. His parents rock, which is probably going to mean he's going to have a long career. They're all very grounded."

She noted that their off-stage rapport makes their acting work better. "We really bonded and I think that helped with the emotional distance that we’ve had to run. And I also understand what it's like to be a kid actor and to be giving him the support to be able to enjoy it and do good work. So we have lots of fun. I adore him… He's got a long career ahead of him."

As a former child actor herself she says she has given him some advice. "It's funny because I've actually written down a bunch of things that I think I'm going to give to him when I leave. Silly things like, 'Learn your lines as soon as you get your script.' And 'You can’t know your lines well enough, especially for emotional stuff.'"

She continued, "You've got to know your lines forwards, backwards and upside down because you get into that reality and all of sudden you get emotional and the lines can just go up on you. So know them automatically and getting to know your character… It's kind of goofy to have to cry and stuff. [So] get comfortable and secure in trusting your instincts. He's got really great instincts. He's a really sweet kid. He's very intuitive. So to trust that and not feel silly when you have to do those things but to just relax. It doesn’t take, 'Oh, I've got to cry.' It just takes actually just relaxing and trusting your instincts and feeling the empathy for these people. We've had lots of talks. And he's really interested and fun. He's a great kid."


For related stories check out:
An Interview with The 19th Wife's Chyler Leigh