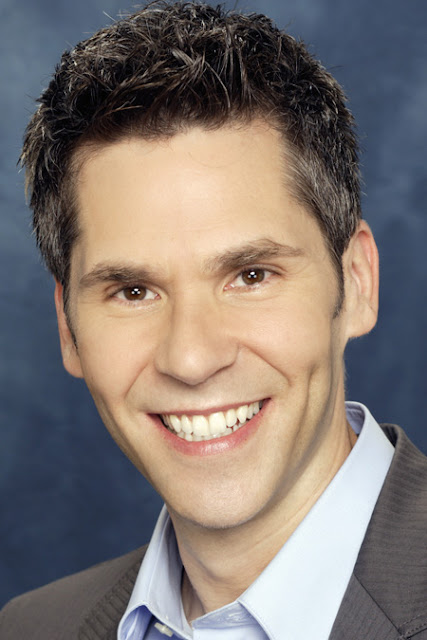 If you had asked us when we first saw John Henson perform in the Boston University improv group Spontaneous Combustion, we could have told you that some day he’d be a star. And we were right. Not only did he go on to a successful stand-up career, he became host of Talk Soup and The John Henson Project. These days he can be heard commentating on the insane obstacle course show Wipeout. In a recent exclusive interview John talked everything he’s got going on.

John looked back at his experience in B.U. in the comedy troupe Spontaneous Combustion, saying, “I was in the founding members of that group… I thought, ‘Wow our humbling beginnings playing in the cafeteria have led to a group that’s lasted more than 20 years.’”

He talked about how that experience helped him set off on a very particular path. John recounted, “I did about two years of improv at B.U. And then I actually left Boston University to pursue a career in stand-up comedy. And I did about eight years of stand-up comedy before I was lucky enough to land the job on Talk Soup. And that improv base led to a lot of improvising in my stand-up act.”

Now John lends his voice to projects like his recent guest spot on Kick Buttkowski: Suburban Daredevil and as the regular co-host on Wipeout. He described the reality show, “I consider Wipeout to be the greatest thing to happen to the pratfall since the banana peel.”

But John has a few other projects in the works. He revealed, “I actually had another stroke of Disney love. My wife [Jill Benjamin] is also a comedian and an improviser. She started out in Chicago improvising and lived in Amsterdam for a year doing improv. And she was Seth Meyers comedy partner. They did a two person show called Pickups and Hiccups that ran for four years all over the world. So comedy is in the fabric of our household. And my wife recently called me and said, ‘You’re not going to believe this, but I just booked the role of the mother of the lead character on Austin and Alley, a brand new Disney series.’”

Little did John know there was a big surprise in store. He recalled, “I said, ‘That’s fantastic.’ And she said, ‘No, no, no. What you’re not going to believe is that they found out we’re married and they want you to play my husband.’ So my wife and I play husband and wife, Mike and Mimi Moon, the parents of Austin Moon on Austin and Alley. We’ve already shot one episode but I think it’s probably going to end up being recurring because, as the producers informed us, ‘We don’t change parents.’”

In addition to all of these projects, John noted, “I have a couple of other television projects that I’m developing. And strangely enough, completely incongruous with the rest of my career, I am producing a feature film that is executive produced by Steven Soderbergh and Double Feature Films, the people who did Pulp Fiction and Erin Brockovich and basically everything. [It’s] based on a true story of a friend of mine who spent 27 years in the FBI, leading as many as six different identities simultaneously — really extraordinary story. And right now we are trying to put the finishing touches on our financing so that, hopefully, the film will be shot this year.”

He continued, “I say hopefully because I’ve been working on this project for six and a half years. It’s a glacial pace compared to television. I was sort of spoiled in the beginning of my career because at Talk Soup you write a joke at 7:30 and tape it at 9 o’clock and it’s on the air at noon. It was like the instant gratification of the entertainment industry. So working on a project for this long is a real departure for me.”

Unfortunately for John’s fans, he won’t be stepping in front of the camera for this one. He explained, “I’m solely a producer. I brought the project to by Steven Soderbergh and Double Feature Films. It is the subject of a New York Times Bestseller called Making Jack Falcone. And we have Benicio Del Toro attached in the starring role and we’ve attached a director, Olivia Asia, from the movie The Jackal based on Carlos ‘The Jackal,’ a terrorist who took over the 1975 OPEC meetings. And hopefully we can lock in a few more actors, and get financing and, with any luck, get it shot this year.”

Having become a famous TV personality since his humble beginnings at B.U., we had to ask John who he thought the greatest pop culture icon of all time was. He replied, “Well Madonna’s a hundred and seventy five years old. People have been writing about her for a long time. When you think about the width and breadth of writing about somebody and the public being fascinated with them over the course of their lifetime, I mean Madonna’s career is more than 30 years old at this point. It’s hard to think of another person — singular entity, we’re not talking about the Rolling Stones — but that’s hard to mess with. And I loved her reanimated corpse performance at the Super Bowl. I believe she’s made out of pipe cleaner right now but I can’t confirm that.”

We can’t either but we can confirm that fans can catch John tonight on the Winter Wipeout season finale at 8 p.m. EST/7 p.m. Central on ABC.