The Real Housewives of O.C.: The Show Can Kill a Dying Relationship 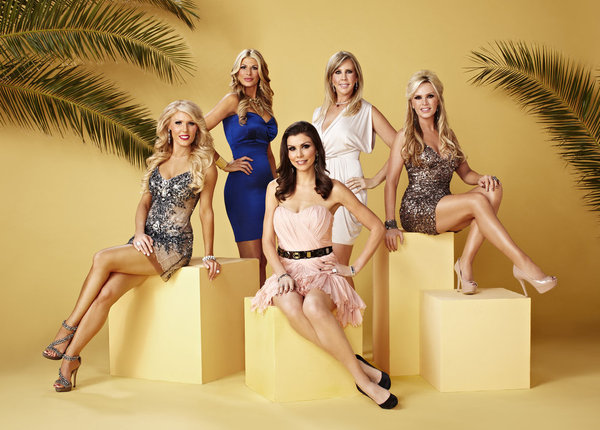 Photo by Michael Rosenthal/Bravo
Clearly there was a lot of relationship drama on the The Real Housewives of Beverly Hills, which culminated in inexplicable tragedy. Luckily for the women of the first series in the franchise, life is a little less tragic in Orange County. Still stars Gretchen Rossi and Tamra Barney revealed in a recent conference call interview that being on Bravo’s reality show can impact their off-camera lives.

Tamra is one of several women in the Housewives family who have watched their marriages fall apart while filming. She acknowledged that filming a reality series can take its toll on an unstable couple, saying, “If you don't have a solid foundation you're going to crumble. And it does give some added stress to your life, your marriage.”

She admitted that there is an upside to watching your troubled relationship from a different perspective. “It's also [therapeutic], because you can see yourself from the outside on TV. And you can see what other people are seeing. And you can be like, ‘That's not right and that's not cool and I shouldn't have to deal with this.’”

Tamra added, “It does bring a lot of struggles, but I think ultimately you're responsible for your own divorce. If you are not in a strong relationship, you might get divorced if you go on a show like this. There's no doubt.”

Still Tamra expressed her belief that the show can’t be blamed for all of the housewives’ personal problems — like co-star Vicki Gunvalson’s split from her husband, Donn. “I don't know if the show had anything to do with the collapse of their marriage. I know it puts strain on your relationship, there's no doubt. But I think that they had some issues for a very long time and it was documented and they tried their hardest and it didn't work out… Only her and Donn know that answer and I think that she's happy now, and that's really all that matters.”

Gretchen, who hasn’t yet hammered out a full commitment from her beau Slade, agreed. She commented, “The cameras might hone in on some of those issues that you already have, but I definitely don't think that cameras are responsible for the breakdown of a relationship. Either you have a strong relationship from the get go and you're going to be able to get through anything and the saying I always say is that the cameras don't lie.”

This season Gretchen will have to face some cold hard truths about her courtship with Slade. Fans can expect the requisite amount of Housewives tension. She confessed, “I have a little bit of a moment of feeling just beyond overwhelmed. And it happened when Slade and I were producing and also in an improv show that we had done. And I do a lot of hosting things and I take a lot of opportunities like that. And I thought I was just going to be hosting the event and it turned out that Slade wanted me to do more and it became very stressful for me because I didn't really want to be doing standup but anyways.”

Gretchen continued giving her sneak peak. “So there's that whole storyline, which actually propels a lot of the storyline throughout the season, because of some things that Slade had said at the improv about the other women. And it actually causes a lot of tension between Slade and I as well.”

The Real Housewives will continue to track the evolution of Slade and Gretchen in season seven. “You just see the relationship between Slade and I. And I was trying to figure out what the next steps in our life are because we're just not sure what direction we want to go. I know I want to have babies, but I don't know if I should have babies without being married. And I don't know if I really wanted to be married yet. So you see a lot of the personal contemplation of what's the next stage in my life.”

Will Gretchen and Slade survive? Watch season seven of The Real Housewives of Orange County when it premieres on February 7 at 9 p.m. EST/8 p.m. Central on Bravo.