Jennifer from The Bachelor on Courtney and Being the Best Kisser 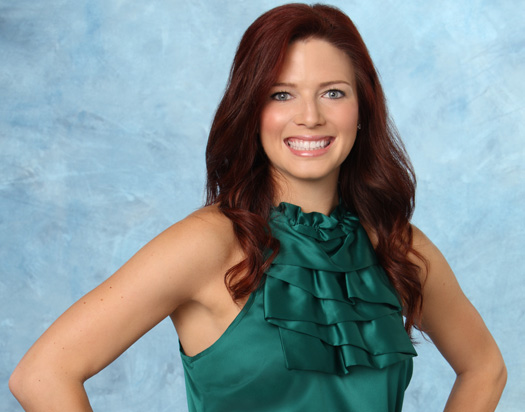 At the risk of sounding sarcastic, this season of The Bachelor may just be the most dramatic ever. Seriously. All thanks to a 28-year-old model from Arizona named Courtney Robertson. Because of her, nice, suitable, down-to-earth women are being sent home week after week as hurricane Courtney leaves a path of dejected bachelorettes in her wake. Last week she had the audacity to sneak off to Ben Flajnik's room and take him skinny-dipping. In the aftermath, the guilt-ridden bachelor was left to eliminate yet another promising prospect who was falling madly in love with him. The victim this rose ceremony was Jennifer Fritsch.

Jennifer, the red-headed accountant from Oklahoma, seemed to be a frontrunner for Ben's affections. Early on he named her the best kisser and their one-on-one date in Park City, Utah, was one of the most romantic so far. During the cocktail party before she was sent home, Ben and Jennifer shared a nice conversation about how she was feeling and some very passionate smooches.

But when the roses were handed out, Jennifer was just as caught off guard as the rest of us that she did not receive one. "It was such a shocker for me to look back on it because everything was right. It seemed like the conversation was so easy. It was so natural. I’m thinking from my date last week and how I loved being in his environment in Puerto Rico playing baseball. He was great. And then he proceeded to kiss me. So definitely I walked away going, 'I got this in the bag. I’m getting a rose.'"

She said after her talk with him that evening she went and did a confessional interview where she "swore up and down there was no way I was going home." She stated, "I had the rug pulled out from under me for sure."

Jennifer admitted that she felt like she was in the top four all along. "I knew he had a connection with Courtney and Kacie B. and Lindzi, obviously. They were some of his favorites. I thought I was a favorite, too, but as I’m watching it now, I feel he sent me home when he did because maybe I was too real. I think he had feelings for me, but at the same time there were people there like Blakeley and Casey S. and Jaime who I think would be easier for him to let go in a couple more weeks versus letting me go in a couple more weeks when he would have to feel bad about it. That’s how I justify it in my mind."


Viewers wondered if they had missed something. Did Ben tell her anything that we did not see on camera, when he was walking her to the limo? She recalled, "He said something to the effect of 'I was feeling a little bit more than he was for me.' I didn’t really think it was a good answer just because I didn’t pick up that vibe from him at all."

And while Jennifer admits to having feelings for Ben at the time and to being "on the track to falling in love with him," she has shifted her opinion in recent weeks. After watching Ben's actions with Courtney she questions the kind of man he is. "I have changed my mind, yes, for sure. I obviously left having no idea that he had gone skinny-dipping — and with Courtney. I wondered when I saw the promo, I was thinking, 'Oh my gosh, if the other girls find out.' Because it changes things a little bit. There were nine, well there were ten of us there. And to think that he would go as far as to skinny-dip with one of them it definitely change things for me that he was no longer perfect."

In the previews for next week's show, it appears as though some of the women confront Ben about the two-sided nature to Courtney's personality. But Jennifer said that is she were still on the show when that occurred she would not have participated. She commented, "It’s not something I would have done. I obviously saw her for who she was too on the other side of things but I would have never said anything to him. If you he’s going to make his choices and if he can’t see through her, then I don’t think he deserves to have anyone tell him or any different."

And although Jennifer may not have called Courtney out to Ben, there was certainly no love lost between the two. Jennifer stated, "I don’t think I have one good thing to say about her… I feel like she’s portrayed exactly the person she is. So if she’s taking heat from America over it, then so be it."

Now that she is no longer in the running, Jennifer does have some strong opinions about who she does think Ben should choose. "I definitely think Emily would be a good match for him. And I loved Rachel. I think they had an awkward one-on-one date, yes, but I think the connection between them runs deeper. I liked Kacie B. She’s a favorite. I just think she’s a little young maybe for him and doesn’t have a lot of life experience or relationship history to be someone for him."

Despite being eliminated early on Jennifer does have one proud accomplishment to take away from The Bachelor — the title of best kisser. She proclaimed, "He may have sent me home, but I definitely have a badge of honor to carry around with me. I was so shocked when he told me that and again looking back I’m like, 'God I hope the person he picks, I hope they’re a good kisser or they might have issue with it.' But no, it’s definitely been fun to come home and get to relish in the fact that I’m the best kisser."

Watch The Bachelor on Monday nights at 8 p.m. EST/9 p.m. Central on ABC.

For related stories check out:
The Bachelor's Monica Spannbauer Dishes on the Other Girls
Jenna Burke – The Bachelor's Best Meltdown