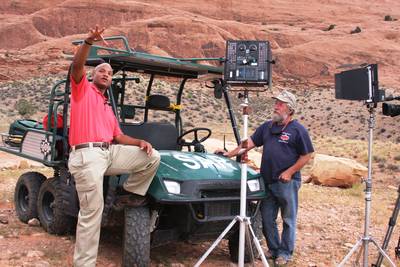 Each week author and army veteran Wes Moore brings tales of mystery and miracles to OWN on Beyond Belief, the latest series to join the network's line-up. The news magazine, which originally aired on ABC, appears to be a better fit for Oprah Winfrey's channel. In a recent exclusive interview host Wes Moore told us why the show works on OWN and shared some inspiring stories from the series.

Beyond Belief originated on ABC and when OWN took over they extended the coverage of the original subjects and added many more new ones. Each episode delves deep into topics that are wondrous and inspiring. We asked Wes why the move from ABC to OWN seemed like the right one for the series. He replied, "OWN has a philosophy of being a network that really does change the way we think about ourselves and think about each other. And one of the really cool things about Beyond Belief, and one of the threads that really lines up a lot of the stories that we're trying to tell, a lot of the people we chose to have as subjects, is they really force you to think differently about yourself and think differently about others."

He added, "[These are] people who are in some cases everyday, average people — our neighbors, people who we go to work with, our colleagues. But from the moment they're called on just do some extraordinary things and have some extraordinary experiences. So that's why this show really fits perfectly into the type of messages and into the type of stories that OWN is hoping to share."

We asked Wes to describe some of the most inspiring stories he has done to date and he told us about two in particular. The first was about a woman named Danelle Ballengee, who was an endurance runner. Wes described her as "a person who literally spends her life pushing her body to the absolute limits of what it can do."

He told us that while out for a run in the Moab dessert, Danelle slipped and fell 60 feet off a cliff. Shattering her hip and parts of her leg. He revealed, "By just sheer will initially, and by sheer adrenaline, she's pulling herself, she's trying to get herself out, even though she really has no use of her legs whatsoever."


Danelle was stuck in the dessert for four and a half days before anyone found her. Wes divulged, "It's a pretty extraordinary story about how she's discovered and what kind of condition that she's in. And I had the pleasure of going out the Moab dessert with her and having her share with me what that experience was like, what that story was like, and really what she hoped that all of us could gain from her sharing her experience."

Wes also discussed a second story covered by Beyond Belief this season, involving a group of people with an unusual common thread. A group of men, all sharing the name Phil Campbell, have been gathering in a small town called Phil Campbell, Alabama, ever since organizer Phil Campbell of Brooklyn, New York, organized the first convention in 1995.

But what began as a way to have fun, turned into a relief effort when the town, population 1,000, was struck by a deadly tornado in 2011. Wes explained, "Twenty-seven people in town lost their lives. There were over 400 home destroyed. Literally this town was leveled by this tornado."

Not all of the stories on Beyond Belief are as selfless as the Phil Campbells, but each and every story gives the viewers a reason to appreciate the world around them. Wes stated, "I leave work inspired everyday and I think you really can’t ask for something much better than that."

Tune into Beyond Belief  on Tuesday nights at 10 p.m. EST/9 p.m. Central on OWN.
Posted by Pop Culture Passionistas at 9:00 AM