Martin Sheen Discovers Family Activists on Who Do You Think You Are? 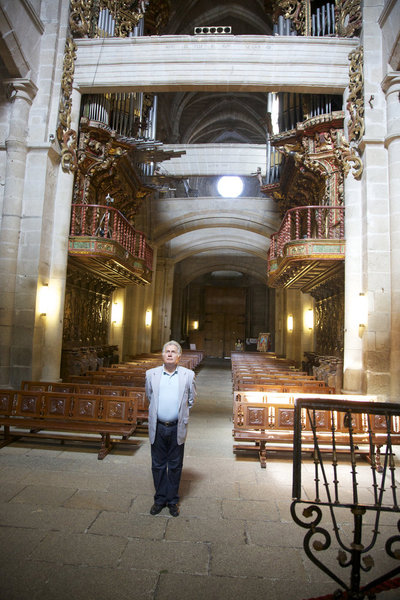 Everyone knows Martin Sheen as the Emmy Award-winning star of The West Wing and a brilliant actor in films like Badlands and Apocalypse Now. And those that follow his off-screen life are aware that he’s not only Emilio Estevez and Charlie Sheen’s dad, he’s also an activist. In fact, Sheen told James Lipton on The Actors Studio that he’s been arrested over 60 times while protesting.

Sheen recently explored his ancestry for the season three premiere of the star-studded genealogy show Who Do You Think You Are? While it might come as no surprise that he had activists in his family, one relative made Martin take pause. In a recent conference call interview he shared his discoveries.

Sheen, born Ramon Estevez, is of Irish and Spanish descent. He talked about what he uncovered about his lineage. “I had two uncles on both sides of my parents' families. My uncle, [Michael Fieland] in Ireland, who was an Irish volunteer and fought in the War of Independence and then fought against the Free State in the Civil War from 1921 to '23. And on my father's side my father's brother, [Matias] had fought against Franco at the onset of his coup and spent an awful lot of time in jail and in fact received a life sentence that we finally rescinded in 1969. And I had just met him that year.”

In making these revelations about his family’s history, Sheen couldn’t help but see an obvious bond. “The connections are just amazing in that they are so deeply personal. And yes, both of them had risen up against oppression and in one case a dictatorship in Spain and had suffered mightily for it but stuck to his principles. And as I say for me maybe this is some unknown quality that I have possessed. Not the extent that these gentlemen did because they were absolutely heroic and risked their lives. But the message is clear that maybe this is part of my DNA.”

Hearing about the social activism of his forefathers gave Martin a few “uh-huh” moments on his exploration. He described his mother’s journey to the United States. “She arrived at Ellis Island in New York City about a week before her 21st birthday in 1921. She was born in 1903 and we always suspected that she was sent away to protect her from any harm during the Civil War because it got very, very intense particularly in Northern Tipperary where she was from. And the fact that her brother was deeply involved, the whole family had to brace for what was coming.”

This theory proved to be correct. Martin confirmed, “She spoke Gaelic and it was confirmed during my time in Ireland with the Who Do You Think You Are? people that, yes indeed, she was sent away for her own protection. And she was meant to come back when the fighting stopped and the Republic was established in 1923. And so it was a very, very satisfying moment for me to know that she, too, was involved.”

Sheen also was impressed with the political passion displayed on his father’s side of the family. He explained, “My Uncle [Matias] I didn't realize that he was in the very, very first level of opposition to Franco in Galatea, which was very pro-Franco at the time. And that is where the coup actually began and Franco was a Gallego as well and, of course, my father and, of course, my uncles. And that he stood up to him right in his backyard.”

While Sheen has had to deal with a few overnight stays for his protest arrests, his uncle had a far greater burden. Martin acknowledged, “He suffered mightily and he went to a concentration camp offshore from Tui. And then he was sent to Pamplona, a major prison in Pamplona for radicals and anyone that opposed the Franco regime. And there he suffered mightily. And the only good thing that came out of that was he learned to read and write in that prison in Pamplona.”

Yet with all the positive political participation on both sides of his family, Sheen also did unveil a darker side to his ancestry. He disclosed some details about his fourth removed grandfather, Don Diego Francisco Suarez. “He was a bit of a dandy and he was a judge in Tui and in a large area of the Galatean Province and he prosecuted a young lady for a moral crime if you will. And she had to flee and she came back and she questioned his judgment and stayed in the community and built a life for herself.”

The legendary actor acknowledged that the current generations of his family found this quite amusing. “They were fascinated with the irony, particularly on my Spanish side, when we discovered that wretched great, great, great, great grandfather Don Diego Francisco Suarez. That was a knuckleball that we weren't anticipating and I took it very personal.” He added, “That was the one that really grabbed the attention around here in the family and caused quite a bit of eyebrow raising.”

Watch Martin Sheen take his journey on the season three premiere of Who Do You Think You Are? on Friday, February 3 at 8 p.m. EST/7 p.m. Central on NBC.

For related stories check out:
Rosie O'Donnell on Who Do You Think You Are?

Lisa Kudrow and Vanessa Williams on Who Do You Think You Are?