Project Runway's April Johnston Says the Show is Not Realistic 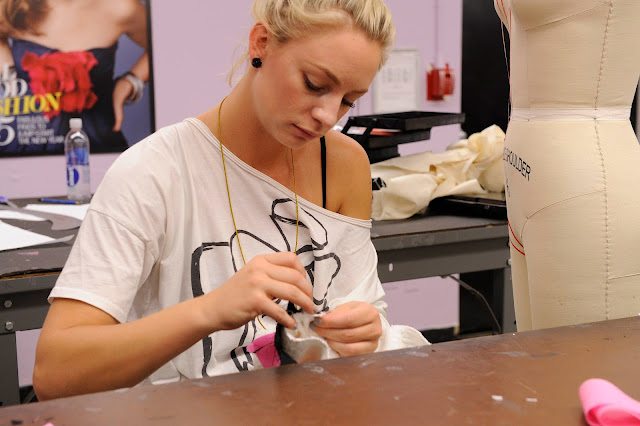 On week four of Project Runway All Stars April Johnston was sent home after a six-hour challenge that had all of the designers running scared. Each player chose a gelato flavor for inspiration. April picked blueberry and created a purple colored mini-dress. The judges were pleased with April's design aesthetic, but not so happy with her execution. In a recent conference call interview the 22-year-old designer from Savannah, Georgia, talked about how unrealistic the challenge was and how disappointed she was by some of the other competitors.

After the grueling challenge, April told us she came to one conclusion, "I'm a great designer but I'm just not a Project Runway designer." She explained, "I can not whip up things in six hours. I don’t have time to do what I do best, which is really fitted tailored mod, body conscious stuff that takes a lot of time to piece together."

She continued, "Project Runway is just not realistic on time constraints for what I do. It's a good opportunity to get the gist of what I do out there, but hopefully people can follow me after the show to see what my full potential is."

The young designer is the baby of the group, but she felt she was experienced enough to go up against her fellow competitors. "I was asked to come back here because I was up to par with everybody else that was there. So I took it as I was mature enough to be there and I was prepared for that. My confidence level was high."

But she thought the time limit did her in. "It's just the fact that a six-hour challenge is not relevant to the world of fashion. [Fellow competitor] Michael [Costello] in an interview said last night he makes things for his clients in 45 minutes to an hour. And I'm sorry, but I don’t make things in 45 minutes. I do cherish what I do and I take it very seriously. It takes time to construct something that's going to be perfect. And for me the Project Runway challenges are just not realistic and I feel like that was my downfall."


April also pointed out that certain techniques were employed to cut corners, that she would never consider using. "Certain people were hot gluing through the season and obviously nobody's going to buy something that's hot glued together. And the thing with me was I never would use a glue gun unless it was on an unconventional challenge where you really couldn’t sew certain things like metal and plastic. I didn’t want to break any of the machines. So I never used a glue gun."

She was upset to learn that fellow designer Austin Scarlett did not feel the same way. "When I found out last night that Austin was gluing his dress together, that really makes me feel bad, because I actually sewed everything. Certain people will take short cuts and other people choose not to and that's just the way the cookie crumbles, I guess."

But she does not regret her choice to stick to her guns. "I'm a competitive person but I would never jeopardize putting someone in the wrong position to overpower them and I'd never be unsportsmanlike. I'm just not that type of person. I was there to do what I did. I didn’t want to have a death battle with anybody to win. I wanted to play by the rules and play fair and try to do the best that I could. And that's all I could do and that's what I did."

Clearly April is not a big fan of Austin or Michael. So who is she rooting for? "I think that Mila Hermanovski is very talented… I think that she would be the one that deserved to win based on her talent and her being fashion forward. A lot of people on there are just recreating things that have been done so many times before. I'd like to see her win because she has such a fresh idea on modern conceptual design."

As for April, she has her sights set on Hollywood. She currently has a clothing line called Mangled Courtesan, where she creates one-of-a-kind pieces for her clients. But she has also dabbled in costume design. "I have some of my designs are coming up on Jane By Design on ABC Family on the seventh episode. So I'm making a bit of an appearance and hopefully things will expand and I’ll grab some more clients and maybe make it out to the west coast someday."

For related stories check out:
Sweet P. Falls Flat on Project Runway: All Stars
Gordana Gehlhausen on Her Reason to Sign-Up for Project Runway