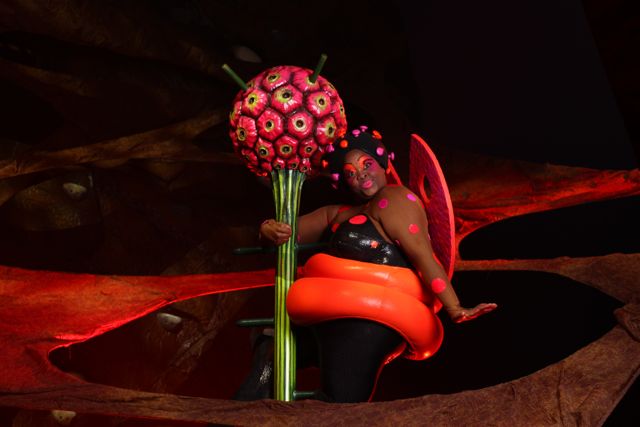 By the time we got to the majestic blue and yellow tent that had been set up alongside the Santa Monica Pier to see Ovo, we were exhausted from the walk from the garage. As if that didn’t make us feel pathetic enough, we spent the next few hours watching a swarm of insanely fit and multi-talented performers doing the most daring and strenuous athletic fetes possible. But we promise that if you can get over the sense of personal shame, you’ll love the latest Cirque du Soleil extravaganza.


Following the presentation, we spoke with Artistic Director Marjon Van Grunsven, actress Michelle Matlock and Trampoline perfomer Karl L’Écuyer. All three have traveled with the show since it’s creation and shed some light on the creepy-crawly, yet incredibly charming production.


Michelle plays the lead character in Ovo’s plot, the Ladybug. She described the storyline, saying, “The show is about the community of insects. It’s a day in the life of their world. So this community of insects, they sleep, they play, they work, they eat, they make love. And one day a foreigner arrives. He is in the form of a city fly. And he arrives with an egg, which in the insect world is a beloved jewel. And he immediately falls in love with the Ladybug and the community steals his egg. And he spends the rest of the show chasing his egg and falling in love with the Ladybug.”

Marjon went on to explain how the performances were then crafted to match the story. She recounted, “It’s clear from the beginning that the show had to be about insects. So if you think about insects you think about, for example, a cricket who can jump three times it’s own body height. So then if you transfer that to the world of Cirque and acrobats you think, ‘Wow. Trampolinists. Power Track artists. The Wall. Jumps. Height.’ Or if you think of a dragonfly, he basically stays in one position. It becomes… a balance artist. So that’s how they start to think, ‘Well, what kind of acrobats do we want in the show?’ Spiders could be… contortionists.”


Karl, who performs as one of the crickets, described the evolution that the artists undergo in development of a show like Ovo. He recalled, “In creation there are many different teams and they all decide together what kind of acts they’re going to put in the show. And then the artistic director of the show… they look at the possibilities and they add every act. And after they try to do an order of the show. We do a few runs and then change the order to make it strong.”


But once a show is designed, the hard work is far from over. As Marjon acknowledged that each project “needs to grow up and evolve… like a little baby… and it needs to get solid and strong.”


That maturation takes not only skilled talent but hours and hours of practice. Van Grunsven discussed the grueling schedule many performers undergo. “It really depends on what your role is in the show. There are artists that train their act every day because of the difficulty that the act entails. For example, the flying act, the wall act, the acrobats have to stay in shape and stay strong.”


The clowns and non-acrobatic talent have it a little easier. Marjon revealed, “With the characters we like to come together twice a week to really specifically go over the acting scenes.”


But the production team seems to work the most tirelessly of all. Van Grunsven added, “The managers and the team probably work up to 60 hours a week. It depends on what kind of a week we have.”


All the hard work is worth it. Ovo is a spectacle, like all Cirque shows, that must be seen to be believed. Check it out at the Santa Monica Pier between now and March 25, 2012. Visit the official website for ticket info.
Posted by Pop Culture Passionistas at 2:00 AM