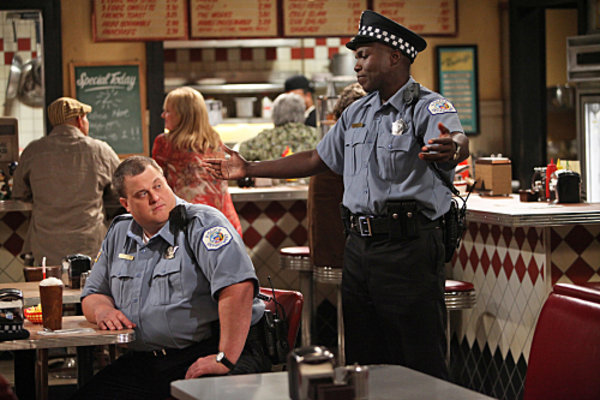 True, the show is called Mike & Molly, and Melissa McCarthy has become Hollywood’s latest “It Girl” thanks to her Academy Award-nominated turn in the smash-hit comedy Bridesmaids. But there’s another relationship on the Chicago-based sitcom that is the underrated gem of the series. Some of the funniest scenes on the show each week occur between Billy Gardell, who plays Officer Mike Biggs, and Reno Wilson, who portrays his partner Carl McMillan.

The two actors are enjoying their stint on a hit sitcom, but there’s a reason that it means more to them than usual. The two have been friends for years and worked together on less successful projects.

Reno talked about what they’d been through together on those short-lived shows of the past before Mike & Molly. “We’ve been on this boat together. We just got the word we got canceled and I’ve got the black plastic garbage bag, putting stuff in it [he pretends to get cry], ‘What are you doing man? I’m gonna call my agent. I think there’s an audition tomorrow. Alright, alright. I love you.’ We’ve been on that boat together.”

Now, he acknowledged that being on a hit series is almost inconceivable to them both. He revealed, “To have a show be as successful as this show, we constantly pinch each other. We constantly look at each other crying, going, ‘This is crazy. This is so great.’ So, yeah, yeah, it’s great to be a part of this with him. It’s really special.”

Their off-camera friendship clearly translates on the small screen. Billy recounted a recent experience he had while visiting Chicago, the city where Mike & Molly is based. “I was eating breakfast at Ed Debevics and there was couple of Chicago P.D. guys sitting next to me. And they were saying that they loved the episode me and Reno did last year when we got stuck in the squad car for 72 hours and became like an old married couple.”

Billy explained that the real life cops could completely relate to what he and Reno portrayed on the show. He continued, “They said that’s the absolute truth. They said, ‘You hit it on the head.’ They said, ‘Because you’re with a man that you would lay your life down for but if he eats a potato chip the wrong way one more time…’ And they said that we really captured that and we were happy that we made them happy.”

An Evening with Carl Reiner (and Dick van Dyke)