Ed Asner Stars as Another Crusty Newsman on The Middle 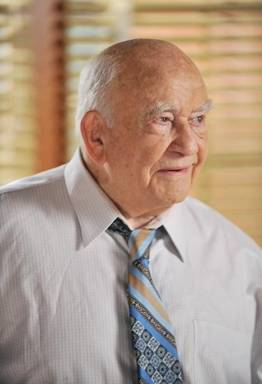 Our top ten list of the best TV shows ever probably line up with most people’s. Who wouldn’t pick The Dick Van Dyke Show, The Bob Newhart Show and Mary Tyler Moore, really? So on the rare occasions that we come in contact with an actor who was on one of those series, it’s an extremely big deal to us. Such was the case earlier this week when we interviewed Ed Asner about his upcoming guest spot on one our modern day favorites, The Middle.

On Wednesday night’s episode, Asner will once again take to the newsroom, this time playing a self-proclaimed “crusty, small town newspaper editor.” A character that he has certainly explored before, first on the sitcom Mary Tyler Moore and then again reprising the iconic character in the drama Lou Grant.

He explained how he gets into the news man mindset, “Well, you wake up on the wrong side of the bed and you start dishing out your [vision] and, hopefully, it will achieve some results.”

While his Middle performance is a one-off, Asner built a multi-Emmy-winning career playing his most iconic character. He discussed his most famous role and how he differs from his on-screen persona. “First I have to tell [fans] that when I played Lou Grant, he was a much finer individual than I am. He would never have suffered the vices that I suffered. I’m not going to tell you those vices. That’s for me to get to know you better.”

He jokingly added, “I will demonstrate them when we meet. I mean after all you are Passionistas and that will serve as a spur for me to show you some of those vices.”

But clearly Asner is happy to be linked so closely to his small screen alter ego. “He was a wonderful man. He is a wonderful man. And I was very proud to be identified with him. So when people see me on the street and say, ‘Lou,’ I’m proud.”

In an incidental anecdote that Asner shared with us, not all of his Mary Tyler Moore show co-stars shared that happy feeling about their roles. Asner recounted, “There was a quick, funny story where Ted [Knight] in the second or third year of Mary went in to Alan Burns, our producer, and said that he wanted to quit because he didn’t like being identified with such a goofball as Ted Baxter. Alan spent maybe a half hour convincing him of how valuable he was and how, certainly, people did not mistake him for that klutz that he was portraying.”

He continued, “After [Burns] had Ted convinced, [producer] Jim Brooks walked in and said, ‘Hey, Ted, how’s it feel to be playing the biggest schmuck in the world?’ Pull him out of the water. Fortunately, Ted stayed and taught us all how to be funny.”

A lot has changed since Asner was on his life-changing TV series. He reflected on how the industry has evolved. “I don’t think it draws the creativity it once did. So when you find it you treasure it, as I did with The Middle. It is harder to stay alive. When we did Mary Tyler Moore, we knew we would be on for 13 [episodes]. And everybody worried, ‘Would we last? Would we last?’ And it didn’t matter to me because I was doing such gold in those scripts and with that character. Nowadays you would never have 13 in a million years.”

Watch Ed Asner on The Middle on Wednesday night at 8 p.m. EST/7 p.m. Central on ABC.

Martin Sheen Discovers Family Activists on Who Do You Think You Are?
Whitney Cummings Talks Abut Whitney