Jason Isaacs Discusses What to Expect from Awake 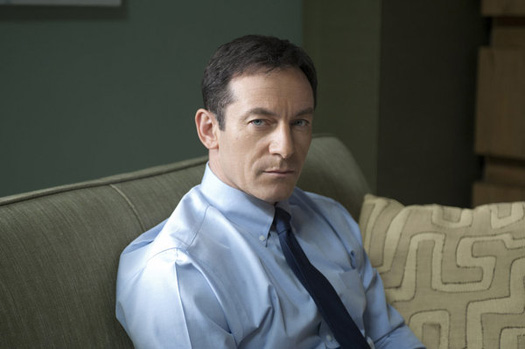 We were looking forward to the premiere of the new NBC drama Awake starring Jason Isaacs and we were not disappointed. Jason, who played the deliciously evil Lucius Malfoy in the Harry Potter movies, stars as a detective Michael Britten, who lives in two separate worlds after a tragic car crash. In one reality his wife survived the accident but his son did not. In the other he still has his son, but has lost his wife. The trick is he has no idea which version is real and does not want to find out. In a recent conference call interview Jason talked about keeping the worlds straight and what to expect from the show.

Making the plot even more interesting, there are other differences to Michael's realities in addition to which family member is alive. Although he is a detective in both worlds, he has different partners and different cases. But in an interesting twist of dreams vs. reality, elements on one bleed into the other.

Jason commented on keeping the two storylines straight. "I have to have a little timeline separately because different things have happened to him in these different worlds. But the great thing for me is that very early on there was quite a lot of discussion about, 'Will an audience know that what has happened in this world? Will they be able to separate the two worlds?' And I kept on saying to them, 'Guys that’s the whole hook of our story.' If Michael wakes up and he’s at work and he says the wrong name for the case or he looks for the wrong partner or the wrong relative walks through the door and he’s surprised, that’s exactly as it should be… I don’t live in two separate worlds, I live one life." He added, "I don’t separate the two worlds at all because it’s quite tough for him to separate the two worlds."

But as a viewer, it can get just a little confusing. Luckily for us the producers have helped us out a bit. Michael has a device to help him keep the two worlds separate, thus helping us. When Michael's wife is alive he wears a red wristband and when he is with his son he wears a green one. And to further enhance the effect, subtle scenic design reinforces the color scheme.

Jason explained, "What you’ll see is that in Rex’s world, which is green world, very subtly there are hints of green everywhere. They are more in the set decoration than in a wash of color. And in Hannah’s world you’ll see red everywhere. Not so much that it will be nauseating but if you look very carefully, the detail on people’s desks and the background and paintings on the wall and stuff have red themes in them. What does it do? Nothing. Consciously it does nothing. But subconsciously it’s a hint and it keeps the set decorators fully employed and hopefully adds texture to the pictures. But really the story should tell you where you are in the world. And if at any point the viewer goes, 'Wait a second, I’m not quite sure what’s going on.' That should be exactly the same point that Michael Britten goes, 'Wait a second, I’m not sure what’s going on.' And instead of that being a drawback that’s part of the fun of watching the show."


Of course, like any pilot, the first episode was mostly laying out the groundwork for the story. Jason promises that while his character Michael swears he wants to keep his life as it is right now, that will not happen. He stated, "We’d be idiots if we let that happen for him… He thinks that he wants things to stay exactly as they are. And anybody with any kind of insight in humanity knows that it can’t be good for him and it’s not right and there will be consequences. Look, his wife has lost his son and his son has lost a mother. And he’s the guy that is pretending that he’s lost neither and trying to cope and be a decent husband and father. And I don’t think it’s going to work out for him the way that he’d like it to."

He divulged, "There are points at which things will become very tricky for him. They get very tricky emotionally for him. They actually get very tricky plot wise for him as well. No one ever buys a ticket to watch the village of the happy people. [Series showrunner] Howard Gordon, who ran 24 for a long time, if Kiefer [Sutherland] woke up in the morning and the president is having a good day, his daughter was playing on the lawn, I don’t think many people would have tuned in. So we send him on some adventures, Michael, and hopefully they’re entertaining adventures."

While he would not share details he did give a few broad hints. "I think it’s fair to say it doesn’t go well for him. We like to see protagonists in jeopardy and he is in both physical and psychological jeopardy. And there was a season long arc as well as weekly procedural, which is to do with the fact that the accident that killed either his wife or his son might well not have been an accident. And I can tell you this. We finish shooting tomorrow and I cannot wait to sit and go and see various doctors for the various injuries I picked up as I’ve been shot and crashed in and thrown over walls and thrown in prison and on the run. And so the walls close in on me both in the real world and psychologically things get tougher and tougher."

Michael has a little help navigating through the two worlds from a therapist in each reality. Both know he is dreaming about the other version of his life and both are trying to convince him to face the truth. But Jason admits his character has a very fine line to walk. "He’s not a stupid man. He’s been around death a lot. He’s a homicide detective. And so he understands what’s going on with him and he realizes that it’s perilous for him in terms of stability."

He went on, "But he knows what the next stage is and the next stage is acknowledging that somebody is dead and he doesn’t want to. So as much as they have an insight into the fact that he has these very realistic dreams and they feel very real when he’s having them, he doesn’t want his badge and his gun taken away. And that’s their job. Ultimately he’s mandated to go to these people for them to assess whether he is safe to be a serving detective. And so there’s a limit to how much he can share with these people… Whenever it strays too close to either getting him taken off the job or taking one of his worlds away, the alarm bells begins to ring for him."

For related stories check out:
Martin Sheen Discovers Family Activists on Who Do You Think You Are?
Whitney Cummings Talks Abut Whitney