Jordis Unga on Her Rocky Battle Round Showing on The Voice 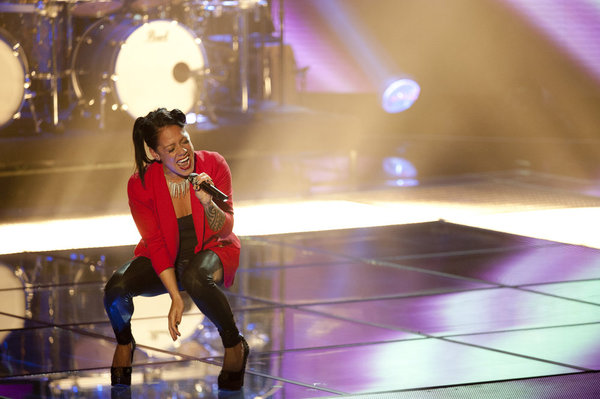 Jordis Unga is no stranger to reality TV singing competition shows, having finished fifth on Rock Star: INXS. So when she took the stage for her Battle Round performance on The Voice, it seemed like she’d sail smoothly through to victory. In a recent conference call interview Jordis talked about what really happened on show night.

Jordis was the first to admit that she’s happy to have the Battle Rounds behind her. “I'm like a sigh of relief that it's over. I'm so happy. It's nerve-racking. The battles, they're really scary.”

She acknowledged the initial bond that competitors feel over making one of the four teams that are hand picked by Blake Shelton, Christina Aguilera, Cee Lo Green and Adam Levine. She remarked, “The entire Voice crew of contestants had been living and existing in this pressure cooker, but the battle’s looming over our heads. And knowing that, we'd all worked so hard to make a team and the next step of this thing, half of everybody that is so elated to be there is going home already.”

That pressure just added to her nerves on performance night. As a result both she and her duet partner Brian Fuente, had a less than perfect showing. Jordis confessed, “I got through it and I'm so thankful for that and I'm so ready to move on from this.”

But she insisted that viewers shouldn’t count her out just yet. Jordis explained that she’s evaluated her experience to date and is ready to make some serious changes. “I think [for live performance] people are going to see a totally different person. When I'm watching this back, I'm like, ‘Why do I look like I want to throw up constantly?’ I'm so nervous all the time. I'm taking a deep breath. I'm ready to move on. I'm ready to do, what I do. So that’s over. I'm happy.”

And, on second thought, Jordis isn’t sure that the criticism of their Battle Round version of Alanis Morissette’s “Ironic” is really fair. Jordis conceded, “I listened to all their comments and just really believed it 100%. I'm listening to them talk and I'm going, ‘Man, that’s been awful.’ And when I watching it… I'm so not disappointed but I wish I could go back and react differently just out of respect for Brian because you know what? When I watched it back, it wasn’t as bad as their comments led me to relive it in my head. It wasn’t bad at all. It was what we rehearsed and I just wasn’t allowed to be that disappointed in our performance when I'm watching a friend of mine go home. I felt really awful about that and I'm actually happy with the performance.”

Whether fans agree with Jordis’ self-critique or not, she had the most important person in her corner —her Voice team leader Blake Shelton, who chose Jordis over Brian to stay in the competition. “Blake looked at me and said, ‘What happened? And I said, ‘I don’t know Blake. Thank you.’ He's like, ‘Girl, please’… And then he hugged my mom. I was like, ‘Oh my goodness. I don’t even know what to do with myself right now. My palms are sweaty. I can't talk. My brain isn't working. It was a mess. I'm a mess.’”

See if Jordis can get back on track as this season of The Voice continues on Monday nights at 8 p.m. PST/7 p.m. Central on NBC.

Lori Greiner Takes a Dip in the Shark Tank


Our Day on the Set of Shark Tank