CELEBRITY SIBLINGS: On the Red Carpet with the Livingston Brothers 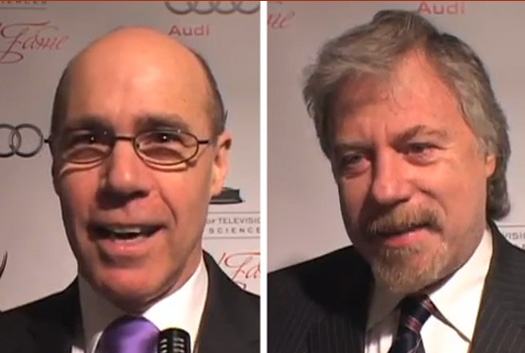 The Archive of American Television asked us to be on the red carpet for the TV Academy Hall of Fame inductees ceremony. We were excited to talk to Two and a Half Men and Big Bang Theory creator, Chuck Lorre, and the man who practically invented reality TV, Jonathan Murray. But we were beside ourselves when we realized the Livingston brothers would be presenting the posthumous award to William Frawley and Vivian Vance from I Love Lucy.

Just the mention of the names conjurs up images of that animated toe, tapping out the beat to the opening theme of My Three Sons. Real life brothers Barry and Stanley Livingston, played TV brothers Ernie and Chip Douglas on the 1960s sitcom. They were honoring their co-star, who was not only Fred Mertz on I Love Lucy but also played Bub O'Casey, their maternal grandfather on My Three Sons. Stanley quipped, "He was a like a surrogate grandfather to me and taught me every four letter word I know."

Stanley told us he ate lunch at Nickodells every day with Frawley and it became his job to be sure the elder actor got back to the set on time. The restaurant is closed now but Stanley recounted going to the eatery long after the My Three Sons days. He remembered, "If you sat in the back of the restaurant on the very back seat, it as big booth there. And if you sat in one area of it, right at the back, you sunk in... It was an impression of Bill from all those years of eating there."

Watch our complete interviews with Barry and Stanley at the Archive's YouTube channel.


For related stories check out:
On the Red Carpet with the Cast of Breaking Bad