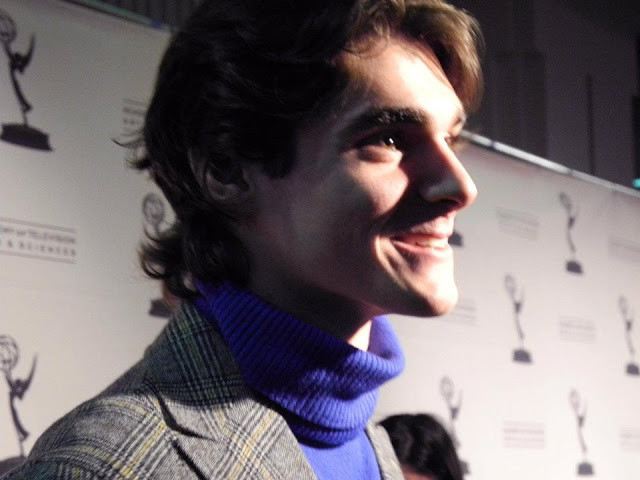 Breaking Bad is quite possibly the darkest show on television these days. And it is most definitely one of the best. Having won six Emmy Awards and garnering another ten nominations, the series is both critically acclaimed and loved by rabid fans. Despite the fact that the lead actors, Bryan Cranston and Aaron Paul, play drug dealing criminals, viewers can't get enough of Walter White and his sidekick Jesse Pinkman.

The character of Walt started the series as a chemistry teacher just diagnosed with advanced lung cancer. He turns to the dark side to provide stability for his family — his wife Sklyer and son Walt Jr., who has Cerebral Palsy. The actor who plays Walt Jr., R.J. Mitte, also has the condition in real life.

We spoke with R.J. on the red carpet on behalf of the Archive of American Television at the Television Academy of Arts and Sciences recent Breaking Bad event. R.J. said he has heard from many fans who are inspired by his character. He stated, "I work with several organizations [for people] with disabilities because I actually have Cerebral Palsy as well. And they love it. They love to see that someone is actually portraying their disability on television. It's really cool."


For more of our red carpet interview with R.J. and the rest of the cast of "Breaking Bad" visit the Archive's YouTube Channel.

For related stories check out:
On the Red Carpet with the Cast of Breaking Bad
An Evening with Carl Reiner (and Dick van Dyke)