Iyanla Vanzant Got a New Idea 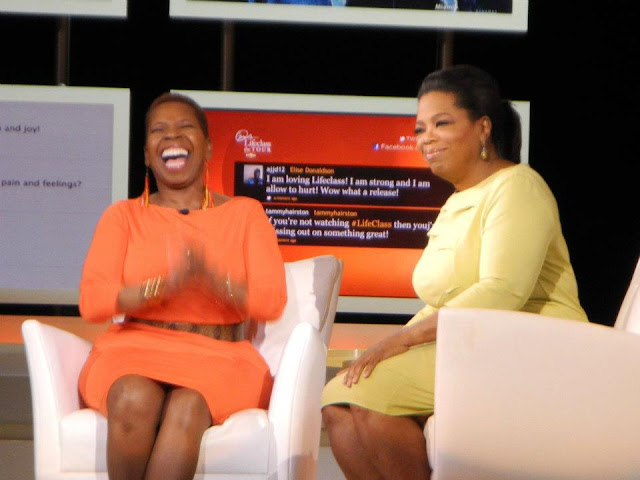 If you ever wonder if you can change your life, check out Iyanla Vanzant’s story. Over the course of her life she has been a single teenage mother living in the projects, a school teacher, a lawyer, one of Oprah Winfrey’s chosen experts and suicidal following the death of her daughter and divorce from her husband. If anyone has lived their own advice, it’s the “have another thought” self-help author and star of the upcoming show Iyanla Fix My Life.

At a recent press event she talked about some of the twists and turns in her life. She recounted, “I taught first grade and kindergarten for about nine weeks. And, as you can hear, my voice is very heavy. So one of my students was doing something, I don’t even know sticking, his finger in the plug or something… And it frightened me and I said, ‘No!’”

What came next was a catastrophic meltdown. Iyanla continued, “The whole room stopped moving — everything — the goldfish stopped moving everything. And he just began to weep and it scared everybody else. So all the kids, all 19 of my kids, were on the floor weeping. So I sat down with them and we just sat there. I mean I gave them cookies. I wiped their noses. I had gum in my pocket… And I said, ‘Okay, I cannot come back in this place. They’re too little.’ They were too delicate so I went to middle school.”


After realizing that being a schoolteacher wasn’t her true calling, Iyanla went back to school to pursue a different career.  But she soon realized that she was on another path than she initially believed.

She recalled, “I now know, I didn’t know then, I didn’t go to law school to be a lawyer. I went to law school to train my mind because my mind had not been trained in the public education system in a poor neighborhood as a black woman. My mind was not trained. I had a high school diploma and a college degree, but my mind had not bee trained to analytical thinking, to progressive discourse. So I went to law school really to learn how to think. I thought I went there to learn how to be a lawyer.”

But the job soon took it’s toll. Iyanla conceded, “After several months of going in and out of prisons, I had to get a new idea. I said, ‘Wait a minute, Ford got a new idea. Let me get one, ‘cause this ain’t working.’”

Now, instead of going into courts with hardened criminals, Iyanla helps people do the hard work to change their lives. She summed it up perfectly, as she is known to do, “I used to promote man’s law and now I teach God’s law. It’s real simple for me.”

Watch Iyanla on Oprah’s Lifeclass: the Tour, which airs on Monday nights at 8 p.m. EST//10 p.m. Central on OWN. Follow the show online at Oprah.com and see the coursework that corresponds to each episode’s theme. Join the “Lifeclass” conversation online on Twitter @OprahsLifeclass and using #lifeclass.

And stay tuned for more information about her new show Iyanla Fix My Life coming to OWN this spring.