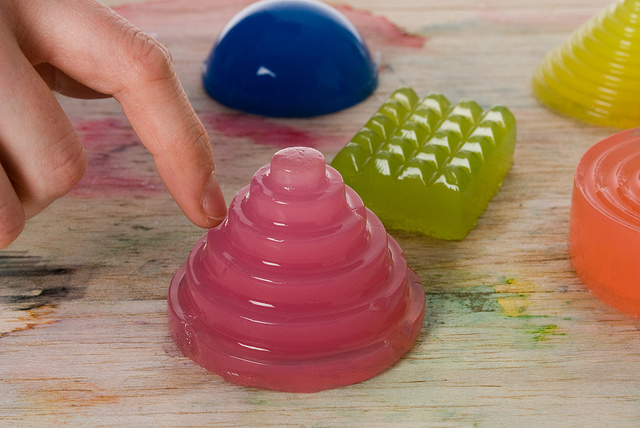 Photo by Véronique HUYGHE via flicker

We've been writing about a lot of heavy stuff lately. And while we are committed to telling you about the good things going on in the world of pop culture, every once in a while we have to just take a minute for something silly. And so we give you Noisy Jelly.

The game is this century's answer to Play-Doh or Slime but with a high-tech twist. This gelatinous science project is also a musical instrument. Players use agar agar powder (we admit we don't know what that is), a variety of dyes and some plastic molds to create their own wiggly sculptures.

The playing surface is a high-tech piece of wood covered in foil that somehow knows when you touch the jelly and magically (OK, it's not magic, it's science) turns the touch into a sound. Apparently the noise changes depending on the shape of the jelly sculpture, how hard you touch the surface, where you apply the pressure and how much salt was added to the mixture.

The game is the invention of students Marianne Cauvard and Raphael Pluvinage at Ensci — Les Ateliers, the French national institute for design studies in Paris, where students specialize in digital, service and product design. They say there was no audio editing in the video we've included below. Just one question: where can we get one?


For related stories check out:
24-Hour Cupcakes - Is There Anything Better?
Rickles Killed It on Kimmel