Roxana Brusso on Touch and Living Life to the Fullest 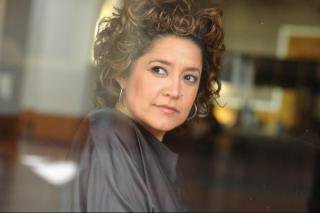 There's so much good TV on right now, it's really hard to decide what to tune into. Even we can't watch it all.  But one new show that has caught our eye is Touch. We love Kiefer Sutherland and were big 24 fans so when we heard he was back on the small screen, we knew it would become appointment television for us. And we were not disappointed. Kiefer plays a the single father of an autistic kid who never speaks, but his fascination with numbers and sequences eventually is exposed as a gift that allows him to perceive patterns that connect every life on the planet.

The supporting cast includes David Mazouz as Kiefer's son Jake and Danny Glover as Arthur Tiller, the professor who exposes Jake's gift. Gugu Mbatha-Raw plays the social worker Clea Hopkinss who believes Jakes should be institutionalized and Roxana Brusso is the director of the facility where they take Jake for evaluation. We recently spoke with Roxy about what she hopes people will take away from this show and what she personally is passionate about.

On What Touch Can Teach Us
"The human connection is what I personally get out of the show. How we're all the same. We might be different ethnicities, different in color, but we're all human beings, we all share the same range of emotions. We're all really one. Even though we live in different parts of the world, especially now with the Internet, with Facebook, Twitter, we're connecting in ways that we never imagined. And this show really plays to that message of having that human connection, that we're all one. That everything we do has a consequence. What you do in the next hour can affect what you do tomorrow at 2 o'clock in the afternoon."

On How Has Touch Has Changed Her Outlook
"What I'm getting out of the show, with every script that I read, is everything does have a consequence. What you do now can really affect not just your life but other people's lives as well, your behavior. We're all responsible. Being role models, like that old fashioned saying, 'It takes a village.' I get that from every episode... Whatever I do in front of a ten-year-old, just because they're not my kid, doesn't mean that I don't have a responsibility for that ten-year-old."

On What She's Passionate About
"I'm passionate about living your life to the fullest. Stopping and smelling the flowers. Making time to do that, because I never know what's going to happen next. I never used to feel that way, but after I lost my parents, certain things that come in to your life make you really become aware of things. Life is short. We don't know how long we're going to be here. I could cross the street in an hour and get killed by a car. If I were to die in an hour, would I be satisfied with my life? That I did the best I could? And I try to live my life like that every day. Every morning I try to give myself affirmations. You know that saying, 'Live like you're dying?' I'm really passionate about that. Spending time with friends. That's really important to me. I always say, 'Life is like a big barbeque.' That's what life is about... I like to spend time with the people that I love."

On Which Pop Culture Icon She Would Like to Be for a Day
"It would be Atahualpa, who was the King of the Incas. I would like to walk in his shoes. I feel like sometimes, these Indians, the Incas and the Mayas, I think they had the answers to life. Life that we don't know. We're so busy with our remote control and technology, which is necessary and wonderful, too. But I think in worrying about all that stuff we've lost our knowledge of human nature... I feel like these guys had these answers... I would like to walk in his shows and see what life was like then. Find out how did they build that wall? How'd they build these pyramids?"

For related stories check out:
Dreama Walker Is Passionate about 'Boring, Cuddly, Hallmark-y Things'
Lori Greiner Takes a Dip in the Shark Tank