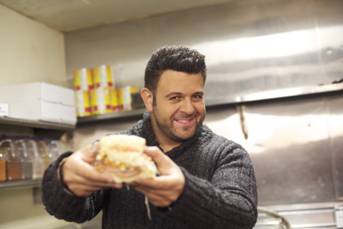 We've talked to a lot of celebrities about what makes them tick. Some say their family is their greatest motivator. Others are obsessed with perfection in a particular art form. But one TV food host is on a much different quest with his new show Adam Richman's Best Sandwich in America.

In a recent conference call interview he confused, "A lot of people in the industry and in theater talk about a passion project and I think that it's a term that is very often overused. But I can truly say that this is a passion project for me personally."

Having worked in the food industry for three decades, Adam has come to respect the often overlooked sandwich. As he remarked, "At the risk of sounding too esoteric, it really is just your imagination bounded by two pieces of bread. It's whatever you want it to be in any incarnation."
And as he was quick to point out the possibilities are endless. "In this day and age where you see people using variants like waffles for bread or biscuits or even grilled cheese sandwiches for the bread of another sandwich, it really is one of the most clear manifestations of what food can be if you truly do have with it."From that very simple notion, came the idea for Adam's new Travel Channel show. As his Man vs. Food franchise was drawing to a close, he found himself being approached with a  number of opportunities. But as he recalled, "Quite frankly, a lot of them were really copies of stuff that I had already seen several, several times. And the art cooking competition show is wonderful but has certainly been done in numerous incarnations. If it's possible to borrow one of my favorite phrases from the British, it's possible to over-egg the custard."Then Adam had a fateful conversation with his co-exec producer at an airport He reflected on the moment, saying, "We were just talking about the next move and… I said, 'You know, people tell me that they follow the show because they want to know the great places to eat around the country. It's the stuff they want to eat. It's the stuff that we all love. And it's the stuff that, moreover, we can all afford."With that, Adam decided to focus on the family-friendly and cost effective dining option with universal appeal. As he noted, "Everyone loves sandwiches. Every culture has sandwiches in it, cuisine-wise, so let's go for it."As the title suggests Adam will travel around the country to different regions, picking a local sandwich king. But ultimately the goal is to find the top choice in the whole United States. He explained, "We eventually developed this concept which has sort of derived structurally from March Madness in that we'll have ten regions and their iconic sandwiches going head-to-head and the idea that it's my personal favorite sandwich."Whichever selection comes out on top, odds are Adam will be happy to eat it. He clearly holds the humble staple item in high esteem. As he gushed, "Sandwiches mean the culinary expression, sandwich in terms of fun and we all know it. Like it's what mom made us when we were hungry. It's what we brown bag it for lunch. It's what restaurants put on the map. It's what you can bake with the most minimal of ingredients or the most expensive of ingredients."And above all, it's adaptable to whatever suits the consumer at any give moment in time. As Adam pointed out, "It's like the mood ring of food."Watch the quest when Adam Richman’s Best Sandwich in America premieres on Wednesday, June 6 at 9 p.m. EST/8 p.m. Central on the Travel Channel.