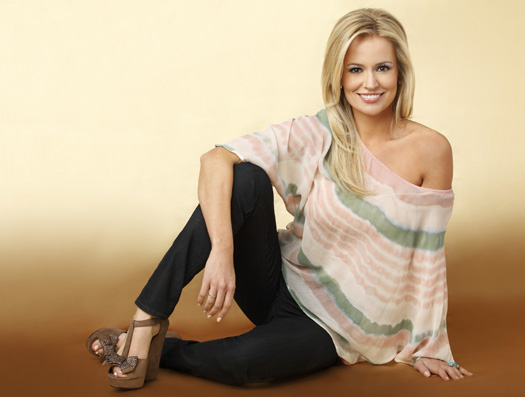 
The Bachelorette started this season with a bang. Emily Maynard had a whole host of interesting character's to choose from including a mystery helicopter dude, a guy dressed in drag, a prince with a glass slipper, an MC who danced into the house and the egg man, goo-goo-g'joob. It's seems she is in for an interesting ride. In a recent conference call interview she talked about the gimmicky entrances, the possibility of seeing Bentley from season seven and how she explained all the cameras to her six-year-old daughter Ricki.

On the Gimmicky Entrances
"I didn’t even really notice because I was so nervous. It was a nerve-wrecking night and it is really overwhelming. Because there’s so much stuff going on and so much stuff you have to remember… It really did not even hit me until watching it just on Monday night with everybody else. But definitely Travis with the egg, that one was a tough one, even in the moment… I love Ryan’s little note that he wrote. The one that said, 'I’m so nervous and you’re so beautiful.' I thought that was really sweet and endearing. Jef rolling on a skateboard I thought was so cool. There were a lot that I just thought were funny in the moment and even the really cheesy ones were a great ice breaker especially in that moment when you’re so nervous."

On Kalon Arriving by Helicopter
"Anybody that knows me knows I would take a classic pickup truck over a brand new Ferrari any day. So if he was trying to impress me, he probably took the wrong approach. But he’s very unique and he is who he is."

On Giving Doug the First Impression Rose
"Obviously, he is a great looking guy and so sweet, but more than anything, I know what it is like to really put yourself out there and take a chance at love and have to leave the biggest piece of your heart back home. And so the fact that he had enough faith in me to leave his son back home really meant a lot to me. I wanted him to know that it wasn’t something that I took lightly."

On Regretting Sending Anyone Home the First Night
"I am so happy with all the guys that I kept. I really had a great group of guys. To be honest, if I could go back and maybe keep one extra, I would have kept Randy, the guy that dressed up as a grandma, because that took a lot of guts."


On Sending Home Brent, the Guy with Six Kids
"I am open to anything and the opportunity to be a step mom is a blessing but at the same time with six kids he is probably not wanting to have any more and I obviously do."

On Jackson, the Fitness Model, Taking Off His Shirt in His Exit Interview
"I didn’t realize all that was going on underneath all of that. And I am kind of bummed that I missed it but I wouldn’t change anything. He was very nice during our conversation but I just have the feeling that we wouldn’t be that great for each other in the long run and I can confidently say that any guy that would take his shirt off and say that is probably not my type."

On the Possibility of Seeing Brad or Bentley on the Show
"I definitely thought it was going to be Brad or Bentley getting out of the helicopter. I just thought there is no way just some random guy would make an entrance so gigantic… I was stressing out a little bit, to be honest, waiting for whomever to get out of the helicopter. But I don’t know how I would have reacted. I don’t know. I tried to stay open to everything and I’m just really glad that everybody I met the first night was a fresh face and someone that I had never met before."

On Watching Bentley on Ashley's Season
"I know Ashley and I absolutely adore her. She is one of the sweetest, most down-to-earth girls I’ve ever met. And to see her go through that, every girl has experienced something like that. Not on that level but every girl has gone through and dated a Bentley type and I think every girl’s heart broke for her in that moment and mine certainly did. I also know just based on the people that I’ve met from the show that are completely different than the way they were whenever I watch it from home, that I want to give Bentley the benefit of the doubt. I just hope that he was able to watch it and grow from it because I think everybody does watch themselves and sees a side of them that they don’t love and, hopefully, he was able to fix a couple of things."

On Explaining the Cameras to Ricki
"Honestly, I really didn’t even know what to do because it’s not like you can Google it. But I just told her that I’d be working a little bit and she really did become so close with all the people on the crew and their kids and she loved traveling with everybody and all that. But I told her that it was for a very elaborate family home video that she’ll be able to watch way, way later down the road."

On Relocating If She Falls in Love
"I was totally on board with moving to Austin. I was looking for apartments for Ricki and I. And Brad and I were even looking at homes together for whenever we got married and I was so excited. Because I’m a mom, I can’t just pick up and move and say, 'We’ll figure it out when we get there.' I have to have 100 percent confidence in our relationship that it’s going to be forever before I pick up Ricky’s life and move it because that’s what I want to do. I have to put her needs before mine. But with that said, I would move in a heartbeat if I knew the person I was going to be with forever lived even in a different country. I don’t care. Ricki is happy wherever I’m happy."