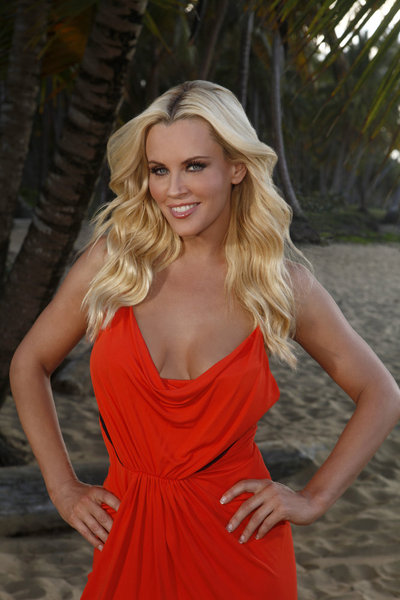 Sometimes inspiration comes from unlikely places. But on a recent conference call interview Jenny McCarthy, the new host of the extreme dating show Love in the Wild, talked about romance in the jungle and in every day life.

The Playboy Playmate turned bestselling author is almost as famous for her personal life as she is for her career accomplishments. A long-term relationship with a mega-star like Jim Carrey and writing a book like Love, Lust & Faking It: The Naked Truth About Sex, Lies and True Romance will do that do a girl. And since her high-profile split, she hasn’t been shy about looking for a new man.

But when it came to finding Love in the Wild herself, McCarthy used her time in Dominican Republic for a far greater pursuit than romance — spending time with her ten-year-old son, Evan. She revealed, “I did go down there for about four weeks. We shot pretty much every day we were there. I was staying in a place that was secure and nice because I had my son with me the entire time which I like to drag him everywhere I go, as a single mom I need to.”

McCarthy seemed happy to be out of the dating game for a bit and focus on production and emceeing the reality show. But she’s since been linked to Chicago Bears linebacker Brian Urlacher and by all accounts has been enjoying her budding romance.

So not surprisingly, the author of the upcoming book Bad Habits: Confessions of a Recovering Catholic, was happy to dole out some dating advice based on her own experience. “While on this wonderful journey of dating hell I've been on I would say I tell my girlfriends I've realized on your… first few dates keep an eye on how your man treats the service industry, your waitress, your waiter, the valet person. You can see someone bleed through, if you know what I mean, if they're snappy or rude or not respectful to people that are trying to help you out, I take that as a big red flag and that person doesn't usually get a second date. That's a quick tip.”

She continued, “And then if you make it to that two weeks or a month when you're dating then the next litmus test is to go on a weekend trip away somewhere. Spending at least three days somewhere you can again see true self even if it comes out for five minutes somewhere in those three days. So that's usually how I keep going or end it immediately and it seems to have done me well like I'm getting rid of the bad guys quick that way.”

Words of wisdom from someone who has been through the dating firestorm. See if anyone falls in Love in the Wild when the show returns on June 5 at 9 p.m. EST/8 p.m. Central on NBC.