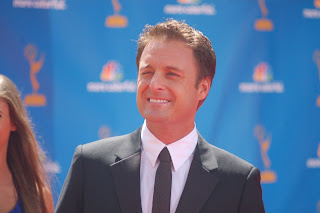 The new season of The Bachelorette starts tonight, with Emily Maynard looking for love after winning the heart of Brad Womack a few seasons back. When things did not work out between Emily and Brad fans immediately started hoping she would be the next Bachelorette. And their TV dreams came true.

Emily is the first single mom to step up and date 25 men in hopes of finding true love. But it's not just a husband Emily is after. She wants a daddy for her six-year-old daughter Ricki. And so this reality changes the tone of the whole season. In a recent conference call interview Bachelorette host Chris Harrison talked about what seems to be a kinder, gentler season.

When casting, the show producers were looking for a new kind of Bachelor. Gone are the days of the frat boy mentality. These men are older and more mature — father material. Chris said, "The level of guys definitely is through the roof. But that just goes to show the guys that knew Emily was going to be the Bachelorette. And the guys that signed up, they came running and lining up to have a shot at this woman."

But they were aware going in that Emily has a daughter and that fact that is clearly going to affect the show this season. Chris stated, "Her being a single mom, it definitely changed the tone. It changed the tone from night one. The guys all came in knowing it was Emily, wanting it to be Emily. But at the same time, they had to know, she's looking through this and at this from a very different light and from the perspective of being a parent. And if you are a parent, you understand what that means. I mean it changes everything."

Still Chris felt there was a slight double standard in the reaction to Emily being cast this season. Many viewers felt she shouldn’t be on the show since she had a daughter at home. Chris compared Emily to the first single dad on the show, Jason Mesnick, noting, "Jason being a single dad it's almost like Sleepless in Seattle with Tom Hanks.  Everybody was like, 'Oh, how sweet, this single dad.' But then when a woman was doing it, it was funny that the reaction was totally different. It wasn't, 'Oh, look at Emily.' It was, 'How dare she?'"


He continued, "So I love our show bringing up this social issue and the juxtaposition like, 'How is that fair?' How is she any less deserving than others than who are in awe for doing this? But I found it funny that that was the case. I kind of love pushing those issues."

And Chris recalled that Emily was hesitant to come on the show again, revealing, "She was reluctant. She was hesitant. Everyone should be just jumping into this. And a single mom should be because you don't get to make decisions for yourself anymore. You're making decisions through your child."

One decision that was made based on Emily's daughter was to shoot the show in North Carolina not Los Angeles. Emily wanted Ricki to have as normal a life as possible while they were in production. And so the first month of filming happened in Charlotte. Chris also divulged that the dates weren't as crazy as in past seasons. He revealed, "They still show these beautiful cities and these countries, but also make sure that Emily's happy and comfortable. But at the same time, there are some dates where she's pushed to the limit and it said a lot about her. And it also says a lot about the guy she's with, how he handles it and how he takes care of her and if he takes care of her."

And as for the hot tub make-outs and over night dates, Chris would not say for sure if the single mom has put an end to those long-standing Bachelor traditions. He did say, "She carries herself like a lady. She carries herself in the eyes of how she wants to be seen by her daughter. And so, she is very careful and very cognizant of that throughout the season and will always be."

But the one question all Bachelorette fans are dying to know is, "Is Bentley coming back?" The past contestant came on the show when Ashley was the Bachelorette, but made it very clear to everyone who would listen that he wished it had been Emily.

Chris confessed, "It was definitely discussed… There was such an obvious storyline, but to me it just felt like such low-hanging fruit. Not that we are opposed to drama and twists and turns, of course. You get them as you do every season. But if he had come back, if he had wanted to come back, which I don't even know if he did, but he had to have really done a 180 and really shown that he was sincere because the whole point of the show was not to pull a fast one on Emily… It wouldn't have been about that joke and that surprise and pulling a fast one on her. That's not at all how this season goes. It's not the tone of this season at all. She is vulnerable and she had her insecurities. And to mess with her just to be messing with her would have been pretty uncool of us."

See how much this season of The Bachelorette differs. Tune in for the season premiere tonight at 9:30 p.m. EST/8:30 p.m. Central on ABC.

For related stories check out:
Ten Thoughts from Chris Harrison About The Bachelorette's Bentley
Ashley and J.P. Kick-Off Their Post-Bachelorette Fairy Tale Romance