Who Knew Breakfast Could Be So Creative? 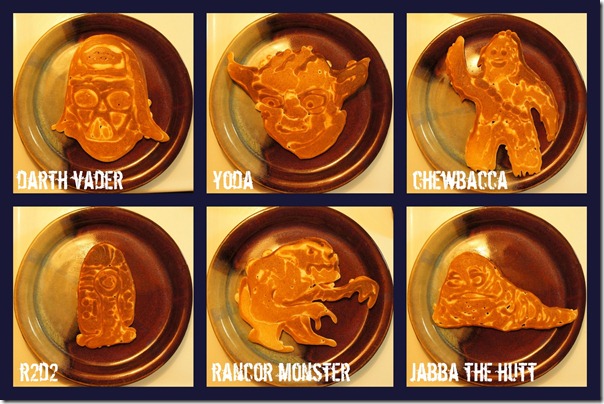 
By now you might have seen the insanely intricate pancake art created by Nathan Shields. He’s a former math teacher and present stay-at-home dad, who’s currently living with his wife and two children in Saipa in the U.S. Commonwealth of the Northern Mariana Islands. If you’ve never heard of them, they’re somewhere in the Pacific Ocean between Hawaii and the Philippines.

In an attempt to entertain his kids in the remote location, Nathan started making pancakes in interesting shapes — just like his mother used to do. Of course if she whipped up hotcakes in the shapes of hearts they probably looked more like the Valentine’s Day variety. Nathan, on the other hand, makes his in the shape of the life-sustaining organ.

His less anatomically correct creations include landmarks like the Eiffel Tower and iconic characters like Yoda. Each one is an incredibly detailed, easily identifiable masterpiece.

And now he’s asking fans of his blog, Saipancakes.com, to join in on the fun. Obviously he doesn’t expect devotees to be able to whip up perfect creations like his French horn and flute flapjacks, so he’s put a little spin on the competition. All you have to do is make the ugliest pancake.

The rules are very straightforward your creation must be mostly batter, cooked like a pancake and someone has to eat it. If you’re interested, you can submit your entry by Saturday, May 19 with a title and explanation at n.m.shields@gmail.com but be prepared for some intense judging. Nathan has left the final decision in the hands of his four-year-old son. The winner and honorable mentions will be posted on the Saipancakes.com site.

Writer/Producer Jane Espenson Talks About Once Upon a Time

The Middle's Eden Sher on What She's Passionate About