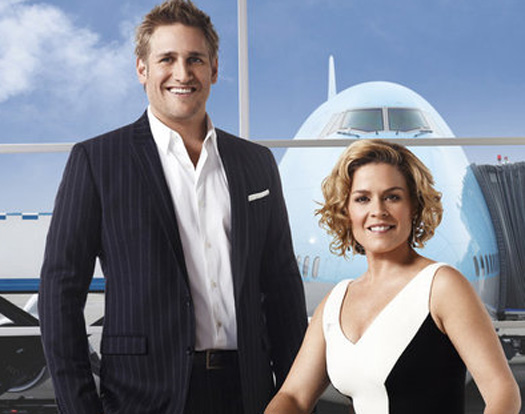 
Around the World in 80 Plates, a new show on Bravo, features hosts Curtis Stone and Cat Cara traveling the world with 12 contestants who are in a 60,000-mile round-the-world cooking competition. They stop on five continents and prepare local cuisines at each destination. And the best part for Curtis and Cat? They don’t judge, they don't mentor, they just get to eat good food and take a great trip.

Each time the contestants arrive in a city, they are split into teams and then must compete in a local challenge. The winners get a leg up in the kitchen test, where they take over a local restaurant and serve the regular clientele. The losing team votes to send someone home. Cat and Curtis don’t need to do the dirty work, the players do it all themselves. We spoke with Cat and Curtis on a recent conference call about the show and how it reflects the cooking industry as a whole.

Around the World in 80 Plates Is a Dream Come True for Curtis
Curtis has appeared on numerous TV series including Take Home Chef, Celebrity Apprentice, Top Chef Masters and The Biggest Loser, but said this show was a dream come true. "When I was very young I got my first opportunity in television with a show called Surfing the Menu and it was myself and another buddy. We traveled around Australia and we surfed and cooked and drank too much wine. And we had a lot of fun. And I’d always dreamt about getting another show that was a little bit similar to that. And when this show raised its head I was, of course, super excited about it because it was travel and the incredible experiences that you get to see and face."

He continued, "And then when they announced Cat as the co-host of it I was just blown away because she’s just like me, an absolute foody and we share a lot of common interests. And it was just the dream job… We literally went to ten different countries and ate some unbelievable food… We’d get a little bit of time off here and there and we’d run around in adventure like two little kids. It was so much fun."

As you might suspect, on a show that combines skill and strategy by asking the players to vote each other off, there is quite a bit of drama. Cat noted, "We definitely witnessed [it] from the very beginning when it was down to the first elimination. These chefs wanted to be in a competition. They were chosen. They wanted to move on. And they absolutely were going to fight for that role and that position… We definitely witnessed some strategy and definitely some people fighting for it."


But Curtis pointed out that this is really quite similar to the real culinary world, "In a lot of ways for these guys it was like doing a stage, which is the French term given to a short period of time that you work in somebody else’s kitchen to gain a little bit of experience and knowledge. And they got to do this in a bunch of different countries around the world. What you’re really doing when you’re in a kitchen is, of course, you’re working as a team and you’re supporting that team as much as you possibly can. But the reality is you really are competing for the next position. If you’re a chef de partie or a line cook as we call it in America, and you want to climb that ladder or that brigade that is so hierarchical in a kitchen, then you have to outperform them. So you do have to compete and there are little games played in everyday kitchen life. So I think that it’s really a fascinating take on [that]."

One thing that is not as reflective of the actual culinary world is the ratio of men to women. The show starts with six male and six female chefs but in most professional kitchens it is not so even Cat reflected, "If you go back in time a lot of the three star Michelin chefs that are in France… they were all taught by their mothers. They were running the restaurants. And then they all got handed over to their sons and the sons turned them into more of a bigger business and a brand and the whole thing… Michelin stars came along and really began to monetize it and really make it into something... And so, of course, there were fewer women because it was such a male dominated industry. It was intimidating."

She continued, "It was an intimidating industry for years and much of a boys club. Women weren’t very welcome. I was just on the cusp of where women were a little bit allowed to come and do apprenticeships. I had eight rejection letters from eight three star Michelin chefs before I got two from George Blanc and Roger Roger… And that was 15, 16 years ago or a little bit longer maybe. But that shows you it wasn’t that long ago where women were not really accepted into some of those kitchens. We’ve made a lot of progress… And women are starting to find their power and to do that."

Cat credits the cooking shows on television with helping to make those changes happen in profesional kitchens. "The great thing about what reality TV is doing is it’s giving women the open door. It’s altering their perception. It’s giving them that inspiration to go for it and to really to join the industry, which is fantastic because we do need a lot more women in the industry… And it’s also showing a different style of chef than we’re used to seeing. A lot of people’s idea of women chefs for a long time has just been more geared towards pastry, more geared towards baking. And we are seeing now that no, women can be chefs. Women can be executive chefs and they can be tough in the kitchen and they can be strong in the kitchen and powerful in the kitchen. This has been great for the movement of more women in this industry, the culinary industry."

For related stories check out:
A Big Week for The Biggest Loser
Our Visit to America's Next Great Restaurant
"Celebrity Apprentice" Contestants' Job Qualifications