The Five Broadcast TV Shows We Look Forward to the Most 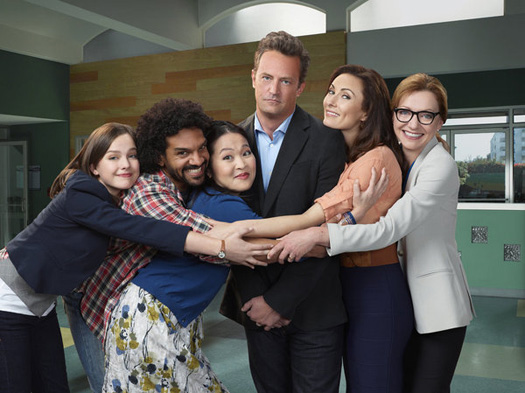 In the last few weeks the broadcast networks have held their annual Upfront Presentations, laying our their fall 2012-2013 TV schedules. It's always an exciting time of year for us to hear what shows we can see down the pike and which ones we intend to add to our already very full plates. These are the ones we find most intriguing.

666 Park Avenue (ABC)
One of our favorite shows of last season was American Horror Story, but we are not sure of that series' fate since hearing the announcement that season two will include a new cast and new story line. So while we wait to see if Ryan Murphy can pull off another home run in a haunted house, we turn our sights on 666 Park Avenue. On this show Henry Martin (David Annable from Brothers and Sisters) and Jane Van Veen (Rachael Taylor from Charlie's Angels) agree to manage a historic New York City apartment with an ominous address, 666 Park Avenue and begin to experience supernatural occurences. The building is owned by Lost's Terry O'Quinn and Desperate Housewives' Vanessa Williams, who are mysteriously able to grant every tenants wishes and ambitions — for a price. A stellar cast and an interesting  premise. Looks like we'll get out ghosts this season one way or the other.

The Following (FOX)
Pretty much say the name Kevin Bacon and we're on board. Now add into the mix that he's finally starring in his own TV show and we couldn't be happier. On The Following Kevin stars as an ex-FBI agent who rejoins the force to track down a serial killer who has escaped from prison. Apparently the evil murderer, who Bacon's character (also named Kevin) caught the first time, used his time behind bars trolling the Internet for other warped-minded fiends and has created a mini-army of serial killers ready to attack. Kevin must stop them before it's too late. Some early reviews have compared both the actor and series to Kiefer Sutherland on 24. We've heard enough. Sign us up.

Go On (NBC)
We're happy to say Matthew Perry is back on TV. While we were not huge fans of his last effort on the small screen, Mr. Sunshine, we loved Studio 60 on Sunset Strip and we sad when 30 Rock knocked it off its perch when both shows with a similar premise premiered the same season. And so we're glad to have Chandler Bing gracing our sets again, this time in a show that seems like it might have staying power. He plays Ryan King, a sportscaster who reluctantly joins a support group after losing his wife in a car accident. In the pilot King takes over the fellow wallowers and sets up a bracket style game of who's got the best sob story or "March Sadness." Matthew seems like he's back in his element in that awkward, sarcastic yet charming average guy who's out to prove that misery wants to be left alone.


The Neighbors (ABC)
We're guessing the elevator pitch for this show went something like, "It's The Coneheads meets Modern Family." The Neighbors takes place in a gated Jew Jersey community whose residency is so restricted it's been ten years since a house has been on the market. So when the Weavers (Jami Gertz and Lenny Venito) are able to buy one they are over the moon. And apparently, that's were all the other residents are from. It seems Hidden Hills is made up of a community of aliens who have all adopted names of famous sports stars — Reggie Jackson, Jackie Joyner-Kersee, Dick Butkis and Larry Bird. The Zabvrons read books for nourishment, cry green goo tears from their ears and repopulate by the men giving birth. But aside from that the Weavers discover they all have a lot in common.

Revolution (NBC)
We had high hopes for J.J. Abrams last outing, Alcatraz, but that show suffered the fate of so many others this season and was canceled in its freshman year. But J.J. is back and has teamed with director Jon Favreau for this new apocalyptic drama that looks promising. In Revolution, the world goes dark. All electricity suddenly stops — no phones, no lights, no cars, no nothing. Planes fall out of the sky, government crashes to a halt and communication is nonexistent. The show picks up 15 years later in a world taken over by militia and rebels. A young girl and a her two companions set out on a quest to discover the root of the blackout and attempt to create a better future.


For related stories check out:
Our Picks for the Best New Cable Shows to Watch
Jonny Lee Miller Returns as Sherlock Holmes