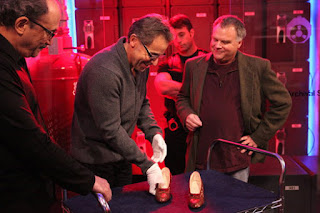 Joe Maddalena's Hollywood Treasure is back tonight on Syfy for season two and it sounds like pop culture fans have a lot to look forward to. Among the things Joe auctioned off last season were the Wicked Witch's hat, Chitty Chitty Bang Bang, Dorothy's ruby slippers and a bunch of cool Planet of the Apes stuff. This time his collections sound equally as impressive. In a recent conference call interview he talked about some of his best gets, prized possessions and upcoming items on the auction block.

On Finally Finding the Ruby Slippers
"My son asked me a question a couple years ago, he goes, 'Is there anything that is your weak spot?' And I said, 'Well, I’ll probably never have a pair of ruby slippers.' And I didn’t think in my career I’d ever be able to sell a pair. I just thought it would just never happen. I didn’t think another pair would ever change hands. I was lucky that within six months I sold Debbie Reynolds’ Arabians for $700,000, then the Samuels pair six months after that. And it’s surreal now looking back that two pairs have gone through my hands. It’s surreal because it’s hard to believe that these things came up for sale and that you can own them. It’s the most iconic prop in the world."

On His New Holy Grail Now that He's Found the Slippers
"The ultimate thing, here’s always another one. The ultimate thing would be Maria the Robot from Metropolis. Now there’s all these legends behind that — in Metropolis, Maria burns, but there’s got to be more than one. So that would be the next one. If you could surface that, it’d be pretty big."

On the Most Valuable Item He's Ever Consigned
"The dress from The Seven Year Itch that we sold for Debbie Reynolds, which was $5.5 million. Debbie’s collection definitely was the highlight of anything we’ve ever sold. Her material was the best that’s ever been put out in the market. And the prices — her first sale grossed $23 million, for 500 items, pretty substantial."

On the Superman Collection He Has This Season
"Actually we just got done cataloguing it. The Dreiers bought the best they could possibly find over many years and they collected Superman. They wanted a comprehensive collection, so this is the most well-documented Christopher Reeve Superman costume used in Superman I and II because they were filmed concurrently. It was made in England by Nathan and Berman’s, labeled, every stitch of it’s got labels in it, and to find a costume like that with that documentation, it’s pretty extraordinary. There’s Jar-El’s, Marlin Brando’s, complete costume, when at the beginning of the movie, when they’re putting their baby, in the little ship and sending him to earth because the world is destroying there. It’s just amazing to go through. They have a piece of kryptonite. They have a George Reeves Superman cape. It’s just mind-boggling what’s in their collection."
On Selling The Hunger Games Town
"I was perusing the Internet one day, and I saw this thing pop up and District 12 was for sale. And I was like, 'What is that? District 12? What do you mean it’s for sale?' So I was really intrigued by this. It’s an actual town, so I was really intrigued by this. So I made a few phone calls and I found out in North Carolina, they filmed The Hunger Games throughout the whole state. There’s a town, 72-acre parcel, where Katniss’ house, Peeta’s bakery, it’s all there. They shot everything on this location, all the structures, all of District 12, is there, really there. All the rooms, it was unbelievable. So my idea was, 'Wow, I want to be involved. I want a part of this. I want to figure out some way to work and sell this property.' So we went out to North Carolina and we went through every location, worked out a deal to  help sell this property, found some amazing pieces, went behind the scenes, went to every location. If you’re into The Hunger Games, boy, it’s going to be a great ride. It’s really amazing what we found and where we went."

On Acquiring the American Horror Story House
"We're trying to expand our reach into all areas of things that have to do with television and motion pictures and this opportunity came along. We got a phone call from a guy, and he said, 'Hey, I have some things from American Horror Story.' I’m like, 'Well great. It’d be cool to get some props.' And lo and behold, we met this man and we ended up at the American Horror Story house. The actual house is here in Los Angeles and it was surreal because I had no idea. And I’m walking up to it and it was really eerie, because you’re in the house. You’re in the rooms. You’re in the basement. You’re thinking of people hanging themselves and all this crazy stuff going on. And it’s really cool because this was like a 17,000 square foot mansion. It’s just another side of our business that we’re pursuing, is we’re going after these  properties now, because they have such a value besides being a house. So for an American Horror Story fan, it was the coolest thing I’ve ever walked through in my entire life, to go through that house. And it was scary. Being in the basement, they turned the lights off. You wanted to run out of there!"

On Turning Down Anna Nicole's Smith Diary
"I remember like it was yesterday. Anna Nicole Smith died and within hours my telephone rang. This man called up and said, 'I have her diaries.' And he brought them in and I read her diaries. I thought about it for a few minutes and I handed them back and I said, 'No thanks.' And he said, 'You’re not going to auction these?' And I said, 'No, not for all the money in the world.' And he’s like, 'Well, why not? They’re worth a fortune.' And I said, 'Yes, but not a fortune that I’m going to go down the road of.' I said, 'Good luck.' Somebody else sold them. They went for $300,000 or $400,000, but to me that was bad taste times 10,000. I could not even go down that road. So those things happen where you have to make a moral decision where I thought that was incredibly exploitative. I just couldn’t handle it."

On Finding the Casablanca White Suit
"A couple weeks ago a lady called me up and said, 'Hey, in the '70s my husband was a B actor and a very overweight guy. He was doing a character part in a movie and they delivered a bunch of costumes to the house. This white linen suit fit him and they let him keep it. It’s Sidney Greenstreet’s white linen suit from Casablanca. They consigned it yesterday… It’s indelible, but there it is, completely labeled, came from Western Costume. It’s unbelievable where these things come from."

On the One Personal Item He's Not Willing to Sell
"The thing I would never give up, that’s from a television show. My son was about six I had an auction. Buck Rogers’ sidekick was Tweaky. He was a little robot and I had a Tweaky in my auction and my son was about the same size. He was a little bit smaller, and Felix Silla showed up, who wore the costume in the TV show. And we met Felix and my son thought this was the coolest thing in the world. And we became friends with Felix and then Felix later sold me for my son, his Tweaky costume with Theopolis around his neck. I’m looking at it. It’s six feet from my desk. It’s the Holy Grail of our family. It’s like the only thing he’ll take it to his grave. It’s just such a sentimental thing among us. We’d never sell it."

On Bela Lugosi's Cape
"I had always heard that he was buried with the cape and so when I met Bela Lugosi, Jr., he’s like, 'Well, almost true.' He was going to be buried with the cape and Bela Lugosi, Jr.’s mom, Bela Lugosi ,Sr.’s wife, wouldn’t allow it. They buried him in a different cape, but she kept the ’31 cape. When you realize what that is, it’s just a big piece of black fabric, but when you realize what it is, it’s amazing that that survived. You’re talking about the greatest groundbreaking deal-changer of Universal horror. It’s amazing to see that it exists."