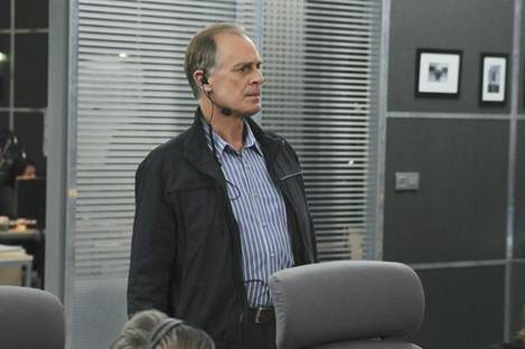 This season Keith Carradine has been playing Ex-CIA agent Martin Newman on Missing starring Ashley Judd as Becca Winstone, whose son mysteriously disappeared. Fans were shocked this week to discover that Newman, the Godfather to Becca's missing son, is in fact in cahoots with the kidnappers. Just another mind blowing twist in a series chock full of surprises.

And despite Carradine's brilliant work on this show and recent turns on Damages, Dexter and Complete Savages, those who know us could probably guess that our favorite Carradine character is the title role in the Broadway show The Will Rogers Follies. So we were thrilled to talk to him in a recent exclusive interview and ask about Missing, his current theatrical work and, of course, his passions.

On Playing Good Guys vs. Bad Guy
"Bad guys are more fun. Bad guys are always more fun. Every actor will tell you that. Well most actors will tell you that, I don’t know about every actor. There are those actors who never play bad guys because they know what works for them. But I like the variety. I've played both and I must say that playing a juicy villain is good fun."

On Working with Ashley Judd
"She's a remarkable actor. She brought the thing to a whole other level and it was a privilege to be a part of it."

On What's Ahead the Rest of the Season
"I can tell you that there are surprises in store. One of the really entertaining facets of this kind of material is the seemingly endless revelation that no one is who you think they are. There's a bit more of that in store for the audience. The audience will not be disappointed."

On His Current Theatrical Project
"I'm doing a new musical called Hands on a Hardbody. We are in previews at the La Jolla Playhouse. And it will probably wind up in New York. It's a great team. It's based on a marathon contest that took place at a dealership in Texas, where contestants stood around a truck and the last person standing with their hand on the truck got to keep it. There was a documentary film made about this contest and some very smart people saw this movie and thought it would make a good musical. And they've written a terrific piece. Doug Wright is the book writer — he wrote I Am My Own Wife. And the composer and lyricist Amanda Green teamed up with Trey Anastasio of Phish. And they have written all the music. And the movement has been designed by Benjamin Millepie and it’s being directed by Neil Pepe."

On Which Pop Culture Icon He Would Be for One Day
"John Lennon — one of my heroes — for his way of looking at the world and his profound understanding of art and life and music. He was extraordinary human being and a poet and I think he changed things for the better."

On What He's Most Passionate About
My great passion would have to be a just world. There is so much about our world that is unjust and unfair and unequal and my passion is to see that improved."

Watch Keith on Missing on Thursday nights at 8 p.m. on ABC.

For related stories check out:
Writer/Producer Jane Espenson Talks About Once Upon a Time
The Middle's Eden Sher on What She's Passionate About