Johnny Carson Returns with a New Game on Facebook 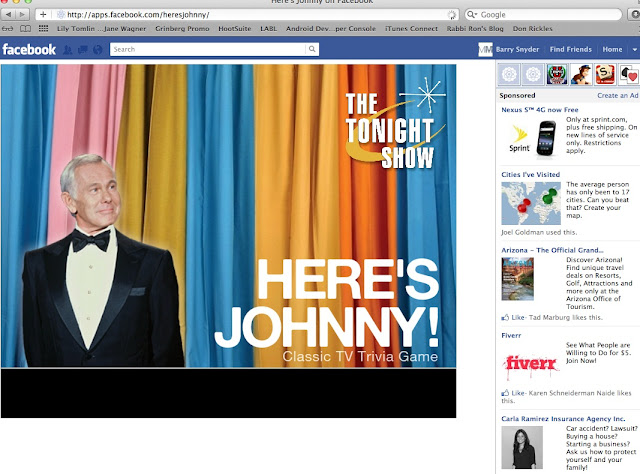 If you’re a pop culture fanatic looking for a treasure trove of trivia have we got a treat for you — the free Here’s Johnny Facebook game. The newly launched app features over 1,000 questions, 400 video clips and 1,500 images from the incomparable Tonight Show Starring Johnny Carson. The questions range from classic Carson characters like Carnac the Magnificent to retro headlines like the Camp David Accords to the biggest stars in television, movies and music from the ‘60s to the ‘90s.

In a recent exclusive interview Jeff explained why he felt now was the right time to honor his uncle Johnny’s legacy. He explained why fans are still drawn to Johnny and his show after all these years “It’s funny. It’s real straightforward. He’s funny. He’s clean. He’s middle of the road. And it has the ability to relate to such huge audience. Everybody’s very, very comfortable with him.”

As Barry pointed out, the Tonight Show Starring Johnny Carson content was an ideal source for a trivia offering. “People will see clips and photographs, hear Johnny’s voice and all the things that were incorporated into the game. It’s a pretty compelling project because you get this mix of world history and pop culture and you get the genius that was The Tonight Show all wrapped up in one.”

And as Jeff noted the time is right to get Johnny’s material to audiences in a whole new way. “The technology is to the point where everybody is very comfortable with Facebook and apps and it’s an interesting transition to go from traditional broadcast television to this new media.”

The game features clips from some of the biggest names in entertainment over Johnny’s 30-year reign as the King of Late Night. Fans will see television debut stand-up appearances by future celebrities like Ellen DeGeneres and Jim Carrey. They’ll be tested on their knowledge or rock, country, pop and opera. And they’ll see young unknowns like Tom Hanks and a seven-year-old Drew Barrymore before they became megastars.

Barry remarked that the project is about more than just celebrity. “It’s a game about what was going on in pop culture from the ‘60s to the ‘90s and it’s fascinating to explore. There’s a lot of poignant moments. Johnny was on in the ‘60s and that was a turbulent period in history. But there are also a lot of fun times like the ‘70s disco era in there.”

But at the heart of it all, “Here’s Johnny” shines because of the undeniable talent that was Johnny Carson. As Barry observed, “There has always been a huge sentiment that there was no one like Johnny. People still appreciate how great Johnny was and how fantastic The Tonight Show was. What a legacy. What an iconic brand.”

And it’s a legacy that will no doubt appeal to a group far beyond Johnny’s original fan base. As Jeff pointed out, part of the mission of “Here’s Johnny” is “to bring this to an audience that has not seen the show in its original form and is not familiar with what he has done. And I think that they will find that he is such an incredible talent and that good material holds up for long, long periods of time.”

In addition to the Facebook game, Jeff and Barry have also launched an app that features one of Johnny’s most beloved characters, Carnac the Magnificent. Fans can to guess what’s inside Carnac’s envelope and will be rewarded with a video clip of the master himself revealing the answer.

Jeff acknowledged that Johnny truly enjoyed playing the mystic from the East. “He loved doing Carnac… You can see in the later versions that he’s genuinely surprised by how well it’s received. That invigorated him to do the bit more and more.”

2012 marks the 50th anniversary of Johnny’s first night as the host of The Tonight Show and the 20th anniversary of his final episode. On May 14 the American Masters documentary Johnny Carson: The King of Late Night will air on PBS. Check local listings for a station near you.

To play the Here’s Johnny game to go http://apps.facebook.com/heresjohnny/.

The Carnac the Magnificent app is available for iOS 4 or later, and Android products, and is compatible with iPhone 3GS, iPhone 4, iPhone 4S, iPod Touch (3rd and 4th generation) and iPad. It is available for download from the iTunes App Store or Android Market for $1.99. To find out more visit www.carnac.me.