A Chat with the Legendary Sandra Bernhard 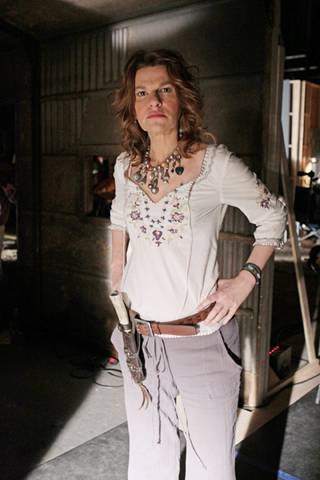 We’ve been fans of Sandra Bernhard for as long as we remember and we’re always happy when she pops up in unexpected places. This Sunday night she’ll do a guest spot on the ABC series GCB playing what she described as a “fierce, Jewish, eco-terrorist named Debbie Horowitz.”
In a recent exclusive interview we talked with Sandra about some of our pop culture favorites including The King of Comedy and Watch What Happens Live. And we got a sneak peak at her future plans.
When we asked Sandra to reflect on her favorite moments behind-the-scenes on the classic film The King of Comedy, she remarked, “It’s the whole experience of working with such amazing people — obviously [Robert] De Niro and Jerry Lewis and [Martin] Scorsese — and being so young and being thrown into a situation with people that had already been well established and feeling like I was at home with them.”
That type of atmosphere has always allowed her the ability to thrive creatively. She revealed, “I feel like I’ve always done my best work when I’m with people who are incredibly talented and lauded and have been around. Because those are the people who don’t seem to be threatened by people who are starting out and really give you the support and the encouragement. And over the years when I’ve worked with that caliber of person, I think I’ve done my best work. Roseanne [Barr]. You want to collaborate. And sometimes folks are feeling unsure and that’s when the work doesn’t really reflect what it should.”
Sandra also does a regular segment on our favorite talk show, Watch What Happens Live, called “Sandrology.” Her unique take on the week’s pop culture events are just the beginning of a bigger Bernhard plan, which includes a five-day run at the Redcat Theater in Los Angeles from May 30 through June 3. Her next stop will hopefully be a television channel near you.
Sandra explained, “I’ve been wanting to get back on TV in a lot of different areas and one of them is to do more of a variety kind of take on television. And it was an opportunity to develop these little pieces and, hopefully, put them together and take them somewhere and do a half-hour show once a week that is topical, pop culture oriented. You could have on guests, you could tear our culture apart a little bit and see what’s underneath. That’s one of the things I’m good at so I’m hoping that that translates into it in the right venue.”
As for what she considers the greatest achievement of her career, Sandra acknowledged, “The key to everything I do is being able to write and have a real strong voice as a performer. And even when I’m hired as an actress I feel like I try to do roles that are intelligent and even if they’re crazy and comedy oriented, I try to keep it at a certain level, because now it’s so easy to dumb things down and that’s just not who I am. I want to bring the conversation up, not down.”
That’s not to say she doesn’t enjoy a little guilty pleasure like the rest of us. She admitted that one of her passions is “the stuff that’s on TV, the reality stuff. The crazy, off the wall, different directions television’s gone. I watch The Voice and I’m fascinated by Christina Aguilera and her whole look and how she throws fake kisses to the people who love her. Everybody’s got their shtick and if you watch it and note it, it’s kind of crazy.”
Of course, she wouldn’t be Sandra Bernhard if she didn’t have a more serious passion, too. “Right now women’s reproductive issues are really important to me. Of course, you can sit back and look at the people that are the puppet masters and trying to disable women’s rights. And you can laugh at them but they’re very dangerous. So there’s that fine line of going, ‘Wait. You’re a total asshole. And why are you weighing in on it? You’re some stupid old white man. I’m sorry. Are you qualified for this conversation?’ So that’s always something that’s really important to me.”
Catch Sandra Bernhard on the season finale on GCB this Sunday, May 6 at 10 p.m. EST/9 p.m. Central on ABC.

And visit the Redcat website for details about the upcoming Sandrology run.
Check out this special clip from Sunday’s GCB episode:
Posted by Pop Culture Passionistas at 12:00 PM