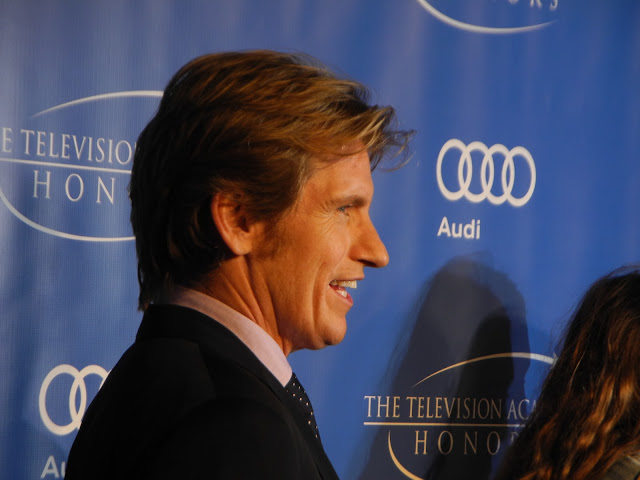 On Wednesday night we attended the Fifth Annual Television Academy Honors event at the Beverly Hills hotel. The star-studded red carpet was packed with people who have used TV as a means of creating social change by focusing on important topics like personal health, breast cancer, sports-related head injuries, the civil justice system, 9/11 first responders and the role women play as peace builders and creators of international law in global hotspots.

The event gave kudos to the Dr. Oz Show, the anthology of shorts Five, a Harry's Law episode called "Head Games," the documentary Hot Coffee, an episode of Men of a Certain Age called “Let the Sunshine In," a Rescue Me installment called "344" and the doc Women, War & Peace. Among the celebs to grace the event were Dana Delany, David E. Kelley and Denis Leary.

We found our chats with the stars to be more inspiring than an average press line. Here are some of the highlights:

Dana Delany hosted the event for the fourth time. She explained why the evening was so important, "It's great that these programs are honored. They're programs that wouldn't necessarily get an Emmy but they should be recognized for doing good and putting a good message out there, not in a tedious pedantic way but in an entertaining way."

Delany also addressed why TV was the perfect medium to be used to motivate social change. "We have such a willing audience. People are going to turn in to TV so why not use it as an opportunity to share humanity, to show that we are all connected because ultimately that's what should be about."

Prolific TV producer David E. Kelley, who's show Harry's Law was among the honorees commented, "It's a tremendous podium so it's an awesome opportunity. It's not for everybody, you do not have to do it. I think the obligation of every television producer, at least in the entertainment side of the fence, is to entertain. If we can't entertain then don't waste your time. But on top of entertaining if you can enlighten, if you can provoke someone to maybe challenge an idea, if you can move them a little bit, then there's nothing wrong with that either."

Denis Leary's show Rescue Me was being honored for raising awareness of the ongoing struggles on the families of those lost in the 9/11 tragedy. Leary, who was joined by his producing partner Peter Tolan, joked about the honor, "Anytime somebody wants to give me an award, I'm happy to take it… I'm taking the award tonight — and several ashtrays."