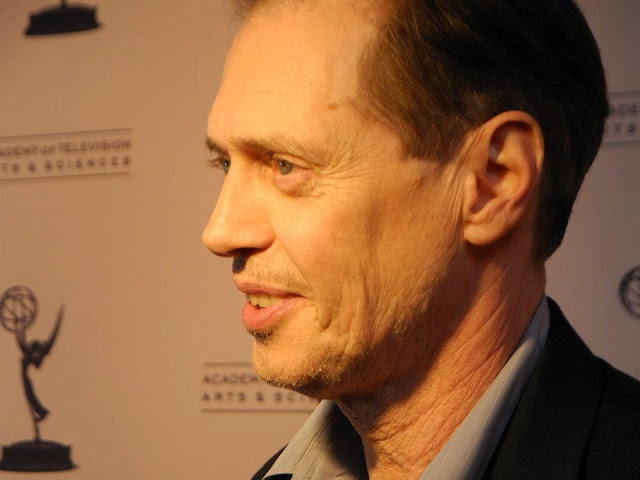 We, once again, were thrilled when the Archive of American Television asked us to shoot the Academy of Television Arts and Sciences red carpet event honoring the cast of Boardwalk Empire. We were highly entertained as we asked stars like Steve Buscemi, Michael Pitt, Kelly Macdonald and Vincent Piazza to name their favorite TV gangster. The answers ranged from the more obvious Nucky Thompson and Arnold Rothstein to surprises like Rocky from Bugs Bunny, Archie Bunker and Mo from The Simpsons.

We also talked to creator Terence Winter about how the show got started and working with Executive Producer Martin Scorsese. Terence described how the project came to be. "I was finishing up my tenure on The Sopranos and HBO called me up and said they had a book they wanted me to read called Boardwalk Empire, which is actually the history of Atlantic City. They said, 'Why don't you read it and see if you think there's a TV series in there?'"

He stated, "Almost as an afterthought they said, 'By the way, Martin Scorsese is attached to this. He's interested in this." That's all Terence needed to know to sign on. "I don't even have to read it." He said, "There is a TV series here. I'm going to find it." He continued, "The idea of getting to work with Martin Scorsese was a lifelong dream."

He admitted facing some fear at first collaborating with one of the most famous directors around. "Initially it was unbelievably intimidating, but within about five minutes he really puts you at ease. He's a great guy. Obviously a film god, but really fun, funny, collaborative, smart, solicitous of your opinion. It was a really easy, fun process and it continued to this day."

He added, "He's exactly what you'd hope he would be. He's really funny, fun New York guy, who also happens to be one of the greatest filmmakers ever."

Scorsese won an Emmy award for directing the pilot episode of Boardwalk Empire. But he has not returned to helm any more installments of the series. Terence holds out hope that this will change, but there is no concrete plan in the works.

He stated, "He knows he's got an open door policy. He's usually busy with a couple of other projects, usually juggling several different things at once. I hope at some point he'll come back and direct another episode — perhaps the finale of the series if we can get him, whenever that is. God willing that won't be for another 26 more years."

Watch our complete interview with Terence Winter at the Archive's YouTube channel. And take a look at our chats with the cast to see who chose Archie Bunker as their favorite TV gangster.

Season three of Boardwalk Empire is scheduled to premiere on HBO in September of 2012.

For related stories check out:
Finally Vanity Fair Gives TV Its Due
Chicks with Steve Buscemeyes