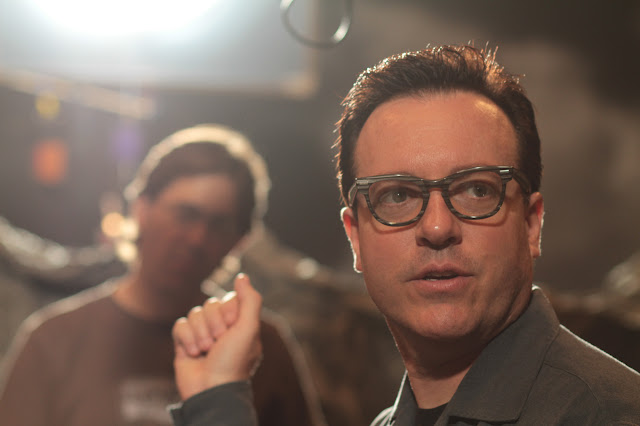 The indie film, The Ghastly Love of Johnny X, will make its Los Angeles premiere at next week's Dances with Films festival in Hollywood, California. The movie, by local Burbank filmmaker Paul Bunnell, is a hybrid of '50s B-movies and campy sci-fi classics with a touch of greased lightning thrown in. It also has the distinction of being the last film ever made on Kodak 35mm Plus-X film stock. We spoke with the director about making the film, working in Burbank and Walt Disney.

Paul set out to make the movie in 2002. He stated, "It was a personal goal of mine to get film in a camera. So I set out to make a movie and I said, 'Let's do this on black and white, 35mm, anamorphic,' which is a wide screen format. We started rolling in November of 2002." By 2004 they had cast the film and shot for ten days, but they ran out of money and had to close up shop.

Six years, and a few false starts later, they finally found the funding to complete the project. Unfortunately, the film culture had changed by leaps and bounds in the time it took them to raise the money. Right as they were about to restart filming, Paul learned that Kodak had discontinued the 35mm Plus-X film stock he had been shooting on.

He called Kodak and begged for their help. He recalled, "My film rep there was really nice and she was able to get me about 90,000 feet of film from all of the Kodak vaults, whatever they had left — a roll here, a roll there. And that's how it happened."

And so The Ghastly Love of Johnny X was born. The press release describes the film as "an exciting retro-style hybrid feature film about a gang of juvenile delinquents from outer space that blends 1950s sci-fi, melodrama, song-and-dance and a touch of horror into a mesmerizing big screen spectacular." And while Paul says there are no nods to any films in particular he was influenced by the various styles of many different movies from Snow White and the Seven Dwarfs to Teenagers from Outer Space.


He noted, "I was influenced by a lot of the classic films from family entertainment to the David Lynch stuff… I just wanted to do something that had those themes in the film, because this movie doesn't take place in the '50s, it takes place today — in an alternate kind of today. But I was just trying to make a story about people really."

Paul grew up in Burbank, a community he found very encouraging to creative people. "I've found Burbank to be a wonderful little community. It's in the heart of things.  We're here with Warner Bros. and Walt Disney Studios and Universal studios, not too far away… There's a lot of actors here, writers, technicians… Burbank is the place to be because so many folks come from all around the world to live here to try to be part of the motion picture industry."

And when we asked Paul which pop culture icon he would want to be for one day, he chose another former Burbank resident. "I'd have to say Walt Disney… Because of the chances he took and the instincts. Walt was able to run an organization and get people behind his ideas and his ideas usually, most of the time worked… Every time he'd try something they'd say, 'Walt, that's not going to work.' And he went ahead and did it anyway and proved them wrong…"

He added, "He took chances. And people that take risks and chances in life get places. So that's why I admire Walt Disney. Being able to have the opportunity to walk in his footsteps or run the studio for a day to see what that was like, that would be something. He reached a lot of people in a very positive way."